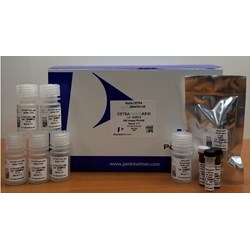 "Very good product that speeds up the drug discovery pipeline."

The Cellular Thermal Shift Assay (CETSA®) assesses the thermal stability of proteins in living cells and cell lysate based on denaturation and aggregation upon heating. The relative amount of remaining soluble protein after heating is measured, and a thermal melting curve of target protein is generated. Compound binding affects the thermal stability of the protein, with a shift in the melting curve indicative of cellular target engagement.

CETSA® is performed by incubating intact cells with the test compound. A melting curve is generated where the sample, in the presence and in the absence of a reference compound, is heat challenged at 12 different temperatures. From the melting curve, a single temperature is selected where there is an obvious shift of the reference compound. This single temperature is then used to perform single concentration or concentration-response curve compound screening. An alternative assay format is to run the assay with disrupted cells. This is useful in measuring the ability of the compound to engage the target protein independently of its ability to cross the cell membrane, and of its potential efflux or metabolization by the cells.

Alpha CETSA® assay kits enable the rapid, sensitive, and quantitative detection of target protein that remains soluble after heat treatment of compound-treated cells without any need for separating soluble and aggregated protein (no washing steps; no separation steps). In an Alpha CETSA® assay, a biotinylated anti-analyte antibody binds to the Streptavidin-coated Alpha Donor beads, while another anti-analyte antibody is conjugated to AlphaLISA® Acceptor beads. In the presence of the analyte, the beads come into close proximity. The excitation of the Donor beads provokes the release of singlet oxygen molecules that triggers a cascade of energy transfers in the Acceptor beads, resulting in a sharp peak of light emission at 615 nm. This Alpha signal generated upon illumination of Donor Beads can be read with an Alpha-enabled plate reader, such as the EnVision®, EnSight™, or VICTOR Nivo multimode plate readers. The amount of light emission is directly proportional to the amount of soluble protein present in the sample. 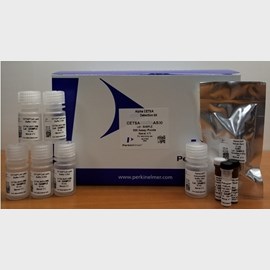