The latest lab products to win a prized Seal of Quality have been announced at ELRIG Drug Discovery 2019, including a coveted Gold award for Sartorius Group.

The Seals of Quality recognize the top 0.1% of laboratory products that consistently receive the highest customer review ratings and are designed to enable scientists worldwide to see at a glance the instruments and services their peers love the most.

Sartorius, Promega, INTEGRA Biosciences and Labcyte are presented with Seals of Quality during the awards ceremony.

To present the latest recipients with these awards, Arif Butt, CEO and Co-Founder of SelectScience, and Editor, Lois Manton O’Byrne, hosted a special ceremony at the Drug Discovery conference in Liverpool, UK.

Sartorius collected a Gold Seal of Quality for its IncuCyte® Live-Cell Analysis System in recognition of having received more than 100 reviews from scientists globally, with an average rating above 4.5 stars out of five.

At the event, three other Seal of Quality winners were also presented with their trophies: 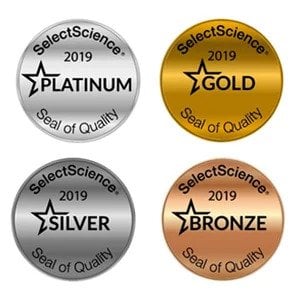 The four levels of the SelectScience Seals of Quality.

Seals of Quality are allocated in line with strict criteria based on the number of reviews a product has received and the average rating of those reviews. There are four levels: Platinum, Gold, Silver and Bronze. SelectScience has now awarded these Seals to over 30 lab products used across the scientific spectrum, but they all have one thing in common — scientists love using them.

“Our Seals of Quality program is designed to help scientists and healthcare professionals across the world see at a glance the lab products most appreciated by their peers,” said Dr. Manton O’Byrne.

“I would like to thank all our reviewers for sharing their valuable opinions and also to congratulate the latest Seal of Quality winners, who have been recognized by the people who matter most — their customers.”

SelectScience was the proud sponsor of the prestigious ELRIG Early Careers Professional Impact Award, won this year by Thomas Fleming, Co-Founder & COO of Arctoris, an online service and cloud-based lab that specializes in the automation of cell-based and biochemical experiments, augmented by machine learning-driven analytics. The award recognizes the early career professional judged to have made the highest impact in the drug discovery community.

The SelectScience team were also honored to participate in two careers events, a panel discussion and networking session, that aimed to increase awareness of roles and career paths in the drug discovery industry and beyond.

Scientists, know a product that deserves a Seal of Quality?

Manufacturers, for further information about the Seals of Quality program and how to win a Seal of Quality, click here