Manufacturer LGC Biosearch Technologies
Be the first to review this product
A dual-labelled probe that combines a hairpin structure and a PCR primer element in a single oligo, allowing for target detection through a unimolecular mechanism. Mismatched hybrids are less stable than the reformed stem region. Therefore, Scorpions Primers only produce signal when the probe region hybridizes to a perfect-match target sequence within the primer extension product. 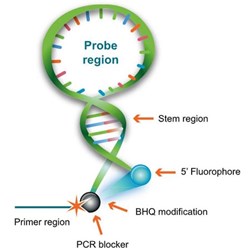 BHQ™ (Black Hole Quencher™)-labeled Scorpions primers for PCR analysis are unlike dual-labeled probes and Molecular Beacons because they combine primer and probe in one molecule, with the primer at the 3' end and the probe contained within a hairpin-loop structure at the 5' end.

Scorpions primers provide a number of important advantages over other PCR Probe formats:

Scorpions Primers are probe/primer hybrids unlike other FRET probes, whose design is such that they emit light only when incorporated into the PCR product during amplification. These primers incorporate two distinct structures: 1) a target-specific DNA probing sequence and 2) a target-specific PCR Primer.

The DNA probing element incorporates a self-complementary stem sequence at the 3' and 5' ends that holds the target specific region in a hairpin loop. A fluorophore molecule is covalently linked to the 5' end and, the dark quencher, a Black Hole Quencher dye, is linked to the 3' end of the loop structure. The fluorophore and BHQ dye are held in close physical proximity by the stem structure to ensure efficient quenching prior to thermal cycling.

The target-specific PCR primer is covalently linked to the 3' end of the DNA probing sequence through a blocking moiety. This moiety prevents polymerase extension into the probing element which could manifest as false positives

Editorial Article
Wondering which DNA probe is right for your assay?
25 Apr 2022 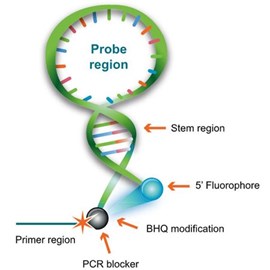