Average Rating: 4.6
|
4 Scientists have reviewed this product
5 out of 5
Ease of use
5 out of 5
After sales service
5 out of 5
Value for money
Write your own review

"In my practice, I used some different GPC instruments: Waters GPCV 2000, Waters HPLC Breeze, Malvern Viscotek HT GPC 350. 2 years ago my company bought a Tosoh EcoSEC HLC8320. The best was the Tosoh because: 1. Good price 2. Online/offline monitoring of instrument conditions 3. Online column check 4. usability - in 2 years I had no problems 5. High reproducibility, repeatability and accuracy 6. perfect applications. My favourite is peak separation, it is very good with copolymers presentation. I have a little experience of working on Shimadzu UHPLC instruments - in my opinion, the software organization not very good 7. The most important is after sales service. If compared with Waters and Malvern - the best one is Tosoh. In terms of disadvantages, if you use RI+UV other detectors (e.g. MALS, Visco) there will be some external blocks. It will need additional software and adjustment. This is the best way for the user (not for service engineers), because it will be inconvenient for maintenance and repair, but it is solvable - all additional detectors and GPC in one block. "

"GPC from Tosoh Bioscience is an easy to use instrument. Online after-sales services are perfect. I have used this instrument since April 2019 and am very satisfied with the reproducibility of results. I will recommend other users of GPC to buy this instrument from Tosoh."

"The EcoSEC fits in our existing equipment. The all-in-one approach is appealing. Service during installation was helpful and rapid in response."

Great results, excellent and surprising experience with the instrument.

"Our application is synthetic rubber analyzing. Very high reproducibility even with samples prepared in different labs. Very good separation and fast results with semi-micro columns. Most valuable is not needing maintenance for a long time, just good solvents is enough for proper working. It was a good surprise to get results not affected by temperature and draught in the lab. The old competitor's instruments are more temperature vulnerable. Pre-sale sample testing was a great opportunity to check the instrument's strengths and get confidence in the best choice. After sale service; prompt reaction to every question about instrument and tech support by the service team which is always on top and proving superb quality."

EcoSEC-HT is a compact high temperature (HT) system for GPC analysis.  It provides stable thermostatization up to 220° C. Autoinjector, pumps, and a dual-flow RI detector are integrated in a compact design. The optional sample processing unit can process up to 24 samples. The TSKgel GMHHR- HT2 GPC columns were developed to ideally complement the EcoSEC-HT.

EcoSEC Elite and EcoSEC HT are fully controlled by the EcoSEC workstation software. 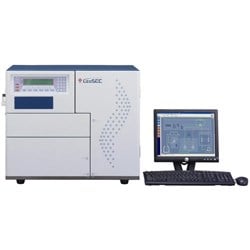