Manufacturer PROGEN  |   Model: PR3003  |  Available Worldwide
Be the first to review this product
Baculovirus cassette vector pAc-lambda-Fc for the expression of human, humanized or chimeric IgG(lambda) in insect cells and secretion of assembled antibodies into the supernatant. The vector derived from pAcUW51 is suitable for cloning of heavy and light chain Fab antibody gene fragments. 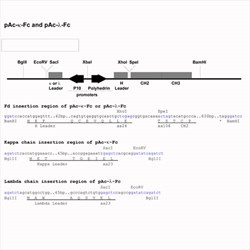 Recombinant  antibody technologies have been widely used to produce various  single-chain Fv or Fab antibody fragments of different specificity. The  randomized combination of cloned variable heavy and light chain  immunoglobulin gene fragments further allowed the construction of human  antibody libraries, which enable the isolation of specific scFv or  Fab antibody fragments against particular antigens e.g. by phage  display. For many applications, however, it is required to reassemble  the variable regions of the selected antibody with immunoglobulin  constant regions to generate complete antibody molecules.

The  baculovirus expression system has been established as a reliable  system for the production of immunoglobulins (Nesbit et al., 1992;  Liang et al., 1997, 2001). Even the development of cassette vectors for  the production of human antibodies have been reported (Poul  et al., 1995a,b). However, these systems are based on a combination of  two different vectors which separately served for the expression of  light and heavy chains. The required careful and time consuming  adjustment of the two respective recombinant baculovirus titers becomes obsolete with the use of PROGEN's single baculovirus cassette  vectors with authentic IgG heavy and light chain signal sequences for  the rapid production of complete chimeric, humanized and human IgG  antibodies in recombinant baculovirus infected insect cells (Liang et  al., 2001). The vectors were specifically designed for cloning of heavy  and light chain Fv or Fab gene fragments isolated from hybridomas,  individual B cell clones as well as antibody libraries.

Vector DesignTo  achieve the expression of complete immunoglobulins, PROGEN offers a set  of baculovirus cassette vectors for the convenient insertion of heavy  and light chain Fv or Fab domain coding regions. The vectors are based  on the backbone of pAcUW51 (BD Biosciences), which contains the f1 origin of  phage DNA replication, an ampicillin resistance gene for selection in  E. coli, the two baculovirus expression promotors of polyhedrin and p10  and SV40 transcription terminators. The gene elements for IgG expression  were cloned successively into pAcUW51. The heavy chain gene cassette  preceded by the authentic IgG signal sequence from IgG1 (subgroup VHIII)  islocated under control of the polyhedrin promotor. In pAc-kappa;-CH3  and pAc-lambda;-CH3 the recognition sites of the restriction endonucleases XhoI and NheI allow the insertion of a VH gene fragment. The entire  coding region of the human IgG1 constant domains are located downstream  thereof. The vectors pAc-kappa;-Fc and pAc-lambda;-Fc were instead designed for the  insertion of a Fab fd gene fragment using the recognition sites of the  restriction endonucleases XhoI and SpeI. The light chain gene cassette  elements, starting with the authentic signal sequence of the human kappa  chain in pAc-;kappa;-CH3 and pAc-kappa;-Fc or lambda chain in pAc-lambda;-CH3 and  pAc-lambda;-Fc, were placed in opposite orientation to the heavy chain operon  under control of the p10 promotor.

Preparation of Reagents The DNA should be diluted and transfered into E. coli cells as described  in standard protocols. Use an overnight culture of a single clone to  extract enough DNA for the following cloning procedures.

We recommend to use the baculovirus transfection kit from BD Biosciences providing linearized and modified AcNPV baculovirus DNA (BaculoGold DNA). The antibody genes supplied on PROGEN's transfer vector are flanked by regions homologous to AcNPV. When the linearized and modified baculovirus DNA is co-transfected with PROGEN&amp;acute;s shuttle vector containing the Fv or Fab domain coding regions into Sf9 insect cells, recombination takes place between the homologous regions, resulting in recombinant baculoviruses carrying and expressing the foreign genes. The baculovirus transfection 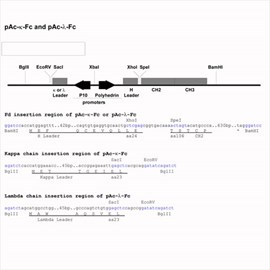