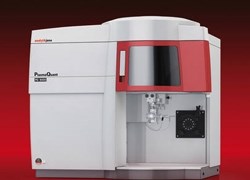 Analytik Jena’s PlasmaQuant® MS was presented to the public at the Analytica Expo in Moscow during a workshop held at the Analytik Jena booth. Used for element trace analysis, the system is suitable for a wide range of routine applications in environmental analysis, food safety, mining, chemistry, and petrochemistry. A workshop, held on April 14, and a conference devoted to ICP methods, which followed on April 15, were attended by leading scientists and experts in mass spectroscopy.

The outstanding presentation made by Iouri Kalinitchenko, Head of Research and Development for ICP-MS, which highlighted the great technical advantages of the new instrument, kindled the interest of those on hand, as was reflected in their numerous questions and discussions. As Marina Mukhina, Analytik Jena’s Regional Manager in Russia, commented: “I am proud that the workshop has revealed a great interest not only among our customers and partners but among our competitors as well. This is a clear signal that Analytik Jena is entering into the Russian market with a solid and competitive instrument, which will make a name for itself in the very near future.“

Analytik Jena has been represented in Russia by a representative office in Moscow since 2000, which is headed by Marina Mukhina, the Regional Manager. The company has been on hand at Analytica Expo in Moscow, the most important Russian trade fair for analytics, laboratory technology, and biotechnology since 2009. This year the company focused at the Expo on the promotion of PlasmaQuant® MS, with the goal of raising awareness for the brand.