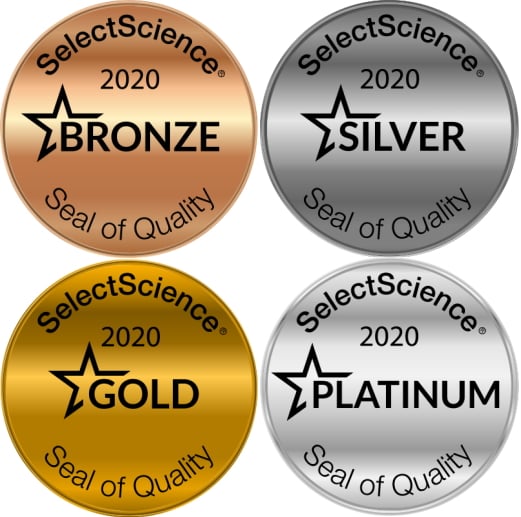 The 10 latest laboratory products to win a prized Seal of Quality have been revealed at the SelectScience® Virtual Summit on Cancer and Immunology Research 2020.

Seals of Quality recognize the top 0.1% of products that consistently receive the highest customer review ratings on SelectScience® and are designed to help scientists and healthcare professionals worldwide see at a glance the instruments and services their peers love the most.

Arif Butt, CEO and Co-Founder of SelectScience, and Editor-in-Chief and Publisher, Kerry Parker, announced the latest winners during the inaugural SelectScience® Virtual Summit on Cancer and Immunology Research. At a virtual awards ceremony, the Incucyte® Live-Cell Analysis System from Sartorius received a rare Platinum Seal of Quality, having received over 200 reviews with an average rating above 4.5 stars out of five — making it one of just five lab products to achieve the Platinum status since the awards were launched in 2017.

Debi Chakraborty, who leads the BioAnalytics Marketing Programs at Sartorius, said: “All of us at Sartorius are elated to receive the Platinum Seal of Quality for Incucyte® Live-Cell Analysis Systems, a testament to the sheer genius and hard work that goes into this novel technology which has empowered cell biologists around the globe in accelerating discoveries.”

Direct-zol™ RNA Miniprep Plus from Zymo Research won a Gold Seal of Quality after receiving 100 or more reviews from scientists globally, with an average rating of 4.7 stars out of five. It means Zymo now has a total of four Seals of Quality.

VistaLab Technologies, meanwhile, received its third Seal of Quality award, a Silver for its MLA Single Channel Pipettes, having received 80 reviews with an average rating of 4.8 stars out of five.

Three more Bronze Seals of Quality were awarded at the virtual ceremony:

DeNovix CEO Fred Kielhorn said: “Receiving so many positive reviews on SelectScience for both the DS-11 Series and CellDrop Automated Cell Counters instruments validates that our drive to achieve unmatched customer support in our market has been important to scientists around the world."

Kerry Parker said: “I would like to take this opportunity to thank all our reviewers around the world for sharing their valuable opinions and also to congratulate these new Seal of Quality winners, who have been recognized by the people who matter most, their customers.”