Editorial Article: PARP inhibitors: A new frontier in the battle against cervical cancer 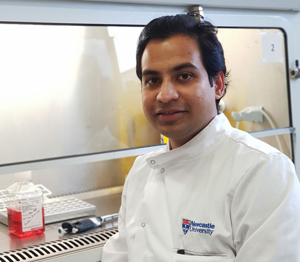 In this exclusive interview, we hear from Dr. Santu Saha about his ongoing research into effective new ways to treat cervical cancer. Dr. Saha, a Newton International fellow of the Academy of Medical Sciences working at Newcastle University, U.K., outlines how a DNA damage response pathway inhibitor, i.e. poly(ADP-ribose) polymerase (PARP) inhibitors (PARPi), can be used to serve as reliable cancer therapies to ameliorate cisplatin toxicity whilst also targeting hypoxic tumor cells for the treatment of cervical and other cancers, where cisplatin-based chemo-radiotherapy is the standard treatment.

Cervical cancer is the fourth most common form of cancer worldwide, with a peak age of incidence from 25-35 years. Some types of human papillomavirus (HPV) have been identified as a cause of cervical cancer. In low- and middle-income countries (LMICs) such as India where screening and HPV vaccination have not been implemented widely, the situation is even more alarming with ~68,000 women dying each year, contributing to ~25% of the total global mortality from this disease. Dr. Saha is exploring novel ways to treat this disease in the hope of prolonging the lives of women across the globe.

The standard of care for cervical cancer is cisplatin-based chemo-radiotherapy (CTRT) but there is a high frequency of radiation therapy failure (~25-40%) and cisplatin therapy is limited by poor bioavailability and kidney toxicity. In fact, radiation therapy does not always work for tumors that have reached relatively large volumes of more than 4-5 centimeters in diameter. These larger tumors are the major source of hypoxic tumor cells which are responsible for radiation therapy failure. Therefore, any agent that could improve the response of CTRT, and reduce cisplatin toxicity is urgently needed.

To improve the way cervical cancer is treated, Dr. Saha and his team are exploring the therapeutic applications of PARPi. There are four PARPi, including rucaparib developed at Newcastle University, which have been clinically approved for ovarian and breast cancer treatment1. PARP is a key enzyme to repair DNA strand breaks and PARPi can prevent the repair of cisplatin and radiation-induced DNA strand breaks to act as a chemo-radiosensitizer to kill cancer cells2. PARP activation is involved in cisplatin-induced kidney toxicity, so PARPi can reduce it3. There have also been reports that PARPi can be effective in targeting hypoxic cells4. Thus, in cervical cancer treatment, PARPi can improve the therapeutic index of CTRT by increasing antitumor activity while simultaneously reducing cisplatin toxicity3.

Dr. Saha has been using mouse models to address how PARPi can reduce cisplatin toxicity3. However, he tells us: “Developing an orthotopic animal model of cervical cancer which requires grafting a tumor into the cervix of a mouse is very difficult. Thus, the lack of a proper animal model of cervical cancer creates obstructions to investigation of the effect of ionizing radiation with PARPi, to test how the combination works against hypoxic tumor cells.” Dr. Saha also added: “Not only is it difficult to develop an orthotopic cervical cancer animal model, but it is also very difficult to access a small animal radiation research platform (SARRP) to give radiation treatment to mice, targeting tumor sites only and sparing normal organs. Even in advanced countries such as the U.K., not all research institutes have this sophisticated instrument. This is a significant problem for those researchers who work with relatively low resources available to them, including LMICs.”

After encountering these difficulties with developing an effective orthotopic animal model of cervical cancer and gaining access to SARRP facilities, among other technical issues, Dr. Saha began to explore an avascular multicellular 3D spheroid model as an alternative to animal models for his ongoing research. Dr. Saha chose to use Corning's ElplasiaTM plates for his research and soon identified a number of key benefits, as he tells SelectScience: “ElplasiaTM plates take only 24 hours/overnight for cell aggregation compared to the conventional agarose overlay method which takes longer.” He adds: “The ElplasiaTM plates can be used to maintain the 3D spheroids for a long time and are very robust which helps to maintain the spheroids for more than 25 days, allowing hypoxic cells to develop within the spheroids.” Dr. Saha is optimistic about using this 3D spheroid model to explore the mechanistic rationale of killing hypoxic tumor cells using ionizing radiation and PARPi in combination.

Looking ahead, Saha and his expert team will continue to investigate PARPi to determine how they can be of value for the treatment of cervical and other cancers. Dr. Saha concludes: “I look forward to developing a tumoroid model derived from a patient’s tumor tissue and a 3D spheroid co-culture model by growing cancer cells with immune cells to see how they can mimic the tumor microenvironment in a petri-dish. This will help to investigate the impact of PARPi with ionizing radiation on immunomodulation.”