Editorial Article: The power of microfluidics to enhance particle performance

The COVID-19 pandemic brought lipid nanoparticles (LNPs) to prominence, with multiple pharmaceutical manufacturers – including Moderna and Pfizer-BioNTech – rapidly developing mRNA-LNP vaccines that were administered globally. The success of these vaccines has firmly established the potential of this technology to help treat a broad scope of diseases and illnesses, especially using gene therapy approaches, where LNPs are already demonstrating promise as non-viral delivery vectors. However, this is just the beginning of the story, with the industry now focused on improvements in delivery targeting and particle performance – from screening through to manufacturing. The key to the success of future LNPs will be in formulation development and process scale-up. 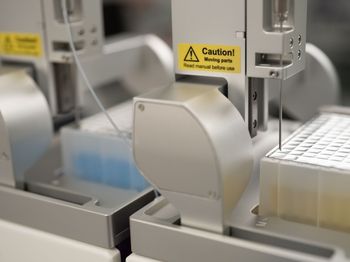 A brief history of lipid nanoparticles

Liposomes were first discovered by British scientist Alec D Bangham in the 1960s, and the first liposomal drug – Doxil® – was approved by the US FDA in 1995. More recently, LNPs based on liposome technology have become an established and successful delivery method for mRNA into cells. LNPs are formed by adding ionizable or cationic lipids to liposomes, enabling the encapsulation of negatively charged oligonucleotides – such as RNA or DNA – through electrostatic interactions. The specific combination of stabilizing, ionizable and helper lipids – as well as structural materials, such as cholesterol or sitosterol – is critical to the functional properties of the resulting particles.

LNPs should stabilize, transport, deliver and release the payload in the most efficient manner possible. A crucial function of the LNP is therefore to protect the nucleic acid payload until it has reached its destination in vivo, preventing early enzymatic degradation and overstimulation of the immune system before releasing it intracellularly at the target site. However, a number of recent studies have indicated that less than four percent of mRNA-LNPs effectively release mRNA intracellularly.1-4 It is therefore clear that significant improvements can be gained through improving both the overall stability of the mRNA cargo and the efficiency of mRNA delivery using LNPs, as well as through the development of novel strategies to target them towards certain tissues or organs.

The secret of (future) success

The key to unlocking the true potential of LNPs lies in effective formulation development. When exploring novel formulations, it is important that particles can be produced consistently. This ensures that any observed changes in the properties or efficacy of the particles can be confidently linked to the formulation change, and not to variations caused by poorly controlled process parameters. Currently, significant efforts are being made to develop new methods for the preparation and manufacture of mRNA-LNP nanoparticles. The goal is to enable production of particles with identical lipid compositions and mRNA payloads throughout the process – from screening, through process optimization and into manufacturing and scale-up – for a given formulation. Although very challenging, this will ultimately provide significant clinical benefits, and have a positive impact on the development of novel genomic medicines using LNPs.

Why is it so difficult to make mRNA-LNP nanoparticles?

Historically, LNPs have been produced using laborious, multi-step self-assembly methods – such as thin film rehydration – which are difficult to regulate and typically result in relatively uncontrolled particle formation. Many efforts have been made to improve mRNA-LNP nanoparticle formation through more precise mixing of the lipid and mRNA solutions, such as the widely used ethanol injection method, where a syringe is used for drop-by-drop injection of lipids suspended in ethanol into aqueous mRNA solutions. However, this method is still subject to fluctuations in concentration during mixing, and can lead to inconsistency between batches. Mixing of the fluids in flow – T-mixing with impinging jet mixers, for example – has also been used in large-scale production, but this results in high shear forces, which can accelerate the degradation and rupture of mRNA-LNP nanoparticles. An alternative approach, which is rapidly gaining traction for the reliable manufacture of various types of nanoparticles, including mRNA-LNPs, is the use of microfluidics. 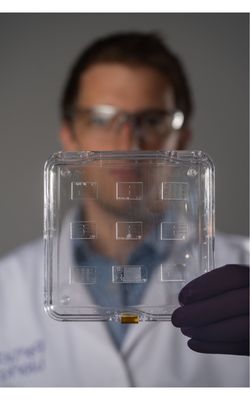 The promise of microfluidics

Microfluidic devices provide unique advantages compared to ethanol injection and T-mixing, enabling precision mixing of different fluids at microliter volumes. For mRNA-LNP production, lipids in ethanol and mRNA in water are continuously flowed into a microfluidic chip from two separate channels, meeting at a junction with a volume of just a few microliters to form nanoparticles. This low reaction volume offers improved homogeneity across the population in terms of lipid composition, mRNA payload and morphology, and careful optimization of lipid formulations, flow rates and mRNA cargoes enables reliable and reproducible production of highly monodisperse nanoparticles.

Microfluidic workflows offer a number of key benefits over alternative manufacturing methods, leading to better process control and more reproducible particle production. This makes it easier to identify the formulation that works best in terms of both maximized therapeutic effects and minimized side effects, without particle-to-particle and batch-to-batch variations obscuring results. More effective delivery of the payload has the potential to allow the injection of mRNA vaccines at a significantly lower dose, reducing the risk for vulnerable people who require more frequent boosters. It may also create a new therapeutic window that allows a much higher dose of mRNA to be effectively delivered without adverse side effects, maximizing therapeutic efficacy. More importantly, this approach could greatly progress genomic medicine, offering solutions to currently unmet clinical needs.

A platform for success

Researchers tackling the significant challenge of screening LNP formulations in search of improved performance are faced with searching through billions of possible unique formulations to find a candidate to progress to process optimization and pre-clinical trials. To run the vast number of experiments potentially required, scientists need a consistent and reliable particle formation platform that is fast, has a low cost per experiment and, ideally, is automated. It is also desirable for the process to be scalable, to avoid the need to reoptimize and revalidate the process when moving towards manufacturing. 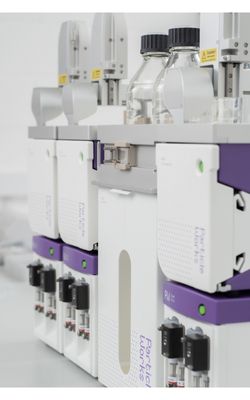 Particle Works has over 20 years of microfluidics engineering experience, and has developed a range of automated microfluidic systems to suit each stage of the nanoparticle formulation development process, ensuring the precise convergence of lipids and mRNA to produce particles of consistent size and structure. Starting with the ALiS (Automated Library Synthesis) System, researchers can automatically screen nanoparticle formulations in a 96-well plate format, using reagent volumes as low as 100 microliters. This system can process a full set of 96 experiments in under six hours, at flow rates of up to 30 ml/min, with in-line dilution capabilities and system washes between experiments to improve the stability and integrity of the resulting samples.

Once a promising formulation has been identified, the company’s ANP (Automated Nanoparticle) System can be used to optimize the process and produce test batches. Uniquely, the ANP System can operate in protocol mode – automating a series of low-volume, single injection experiments to probe different process parameters for a fixed pair of reagents – then switch to continuous mode to produce liters of material for pre-clinical trials. Particle Works will also soon be releasing the ANP Pilot System, which is designed to enable large-scale production of material for clinical trials and product manufacturing for GMP environments.

All Particle Works systems use the same microfluidic pumps, fluoropolymer tubing and reusable glass microfluidic chips, making the validation of new process technologies at each stage of development a thing of the past. Available in a range of interchangeable sizes and geometries to suit different applications, the reusable glass microfluidic chips also significantly reduce the cost per experiment, as well as limiting plastic waste to improve overall process sustainability, helping to cost-effectively accelerate formulation development.