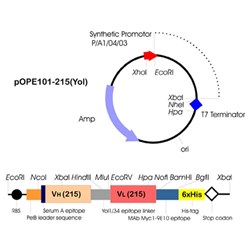 Introduction
Complete immunoglobulin molecules cannot be produced in Escherichia coli, but within the past decade, recombinant antibody technologies have been widely used to express various recombinant single-chain Fv antibody fragments (scFv) of different specificity. ScFv antibody fragments have first been deposed as cytoplasmic inclusion bodies followed by refolding in vitro. Due to the general low folding efficiency, however, another strategy has been developed which better imitates the folding conditions of antibodies in eucaryotic cells. The secretion of the antibody fragments into the periplasmic space of E coli permits their production as soluble and functional proteins with correctly formed intramolecular disulfide bonds. The total yields are usually lower than those of inclusion body refolding, however, it is the method of choice for a rapid assessment of antigen binding activity and specificity.

Vector Design
The cassette vector pOPE101 was designed for the convenient insertion of heavy and light chain variable domain coding regions and for production of functional monomeric single-chain Fv antibody fragments in E. coli (Schmiedl et al., 2000). The corresponding DNA fragments of human or mouse origin can be amplified by PCR using PROGEN's primer sets F2000 or F2010, respectively. The amplified gene fragments encoding the variable heavy and the variable light chain domain are cloned in-frame between a pelB-leader sequence for the secretion of the fusion protein into the periplasmic space, and a short region encoding tags to facilitate detection and purification. The VH and VL genes were joined by a DNAfragment coding for a flexible 18 amino acid residue linker containing the first six amino acids of the CH1 constant region domain and the hydrophilic pig brain apha-tubulin peptide sequence EEGEFSEAR. At the 3´-end of the VL domain coding region, a short DNA fragment codes for a peptide tag of the proto-oncogene product c-myc. It contains the linear epitope EEQKLISEEDL, which is recognised by the mouse monoclonal antibody mab Myc1- 9E10 (Evan et al., 1985). This is followed by six histidine residues, facilitating purification of the fusion protein by IMAC. The vector backbone further provides a strong synthetic promotor, the T7 terminator, the ColE1 origin of replication and an ampicillin resistance marker for selection.

Preparation of Reagents
The DNA should be diluted and transfered into E. coli cells as described in standard protocols. Use an overnight culture of a single clone to extract enough DNA for the following cloning procedures.

Cloning procedure
The immunoglobulin heavy and light chain Fv domain coding regions must be cloned in-frame into pOPE101 (see attached graphic). To clone a VH gene fragment the recognition sites of the restriction endonucleases Nco I and Hind III are recommended. The corresponding VL gene fragment should be introduced by using the recognition sites of the enzymes Mlu I and Not I. The cloning sites of the selected Fv gene fragments have to match the corresponding amino acid positions given by the vector. Gene fragments of genes derived from human or mouse origin by using PROGEN's PCR primer sets F2000 or F2010 can be directly cloned into pOPE101. After cloning, we recommend to check the sequence of the inserts to confirm that no mutation occured in the open reading frames. The vector is now ready-to-use for the expression of functional recombinant singlechain Fv antibody fragments in Escherichia coli.

The expressed antibody fragments can be purified from periplasmic extracts as described in standard protocols (Schmiedl et al., 2000; Schmiedl and Dübel, 2001). 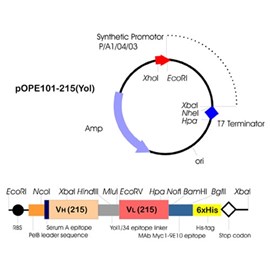