Manufacturer Andor Technology
5.0
/
5.0
|  2 reviews
|  Write your own review
Image at an unrivalled combination of speed, sensitivity, confocality and resolution beyond the diffraction limit 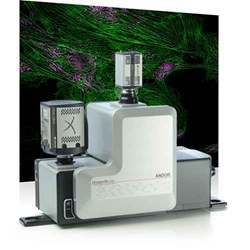 
Average Rating: 5.0
|
2 Scientists have reviewed this product
5 out of 5
Ease of use
5 out of 5
After sales service
5 out of 5
Value for money
Write your own review

Great results. It has a lot of features at affordable price. It's a must have product.

"We use multiple imaging approaches (e.g. widefield, confocal, TIRF, single particle high speed two-camera dual color) to perform cell biology research, mostly in budding yeast, and the Dragonfly system has performed amazingly well in everyone. The accompanying software developed to run the system (Fusion), has also worked well. Fusion still needs a number of add-ons to be as comprehensive and use friendly as other imaging software packages, but I have no doubt it will get there, making the Dragonfly system truly spectacular. I would not hesitate to recommend the Dragonfly system to anyone given the image quality, speed, and sensitivity that we have experienced."

The 200 series offers many of the key features that make Dragonfly performance exceptional: Confocal speeds of up to 400 fps; Borealis™ enhanced illumination for a large and flat field of view; ClearView-GPU™ deconvolution; dual-camera acquisition; choice of optical zoom and pinhole size.

For those who might be considering a new or additional confocal, but looking for something that pushes new imaging boundaries. The Dragonfly 200 offers a price-point comparable to traditional point scanning technology.

Deconvolution is an invaluable tool for bringing out the subtle details of a 3D data set that might otherwise go unnoticed, even in a good quality confocal stack. Attain a lateral resolution down to 140nm and axial resolution to 250nm.

ClearView-GPU™ deconvolution has been made an integral part of the system to enhance the finest features of your image. Up to 50x faster than CPU methods, GPU-acceleration and processing while acquiring allow immediate visualisation and comparison with the original data! Use deconvolution for the highest 3D resolution, especially powerful as the only super-resolution tool that can be applied to high-speed imaging such as live-cell and multi-dimensional imaging.

SRRF-Stream can be applied to regular fluorescence probes down to a resolution of 50nm and does not require any special sample preparation. Consequently SRRF-Stream can be used on live samples, as well as fixed, and can capture up to 1 frame per second (512x512) ideal for the likes of cytoskeletal dynamics and organelle structure.

Direct Stochastic Optical Reconstruction Microscopy, or dSTORM, is a single molecule localisation technique that requires high illumination power to drive fluorophores into a dark state. By collecting a large number of frames of different fluorophores within a region, a high-resolution image can be built up.

The Dragonfly 500 series provides the high illumination powers and an optional 3D lens to perform dSTORM acquisitions in 2D and 3D. The dynamic nature of post-processing algorithm developments means that, rather than restrict analysis to Andor software, users are free to select any of their preferred platforms for analysis. Choose to use capture dSTORM image sets when you require resolutions down 20nm. 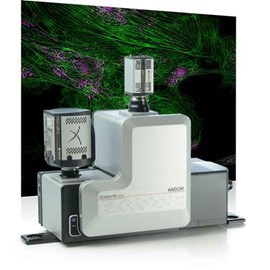 Great results. It has a lot of features at affordable price. It's a must have product.