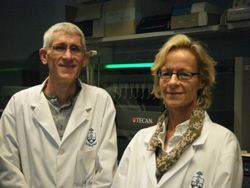 Scientists at the University of Toronto, Canada, have chosen generations of Tecan microplate readers to monitor the effects of environmental or drug perturbation on molecularly barcoded yeasts.

The Corey Nislow and Guri Giaever laboratories – which have recently moved to the Department of Pharmaceutical Sciences at the University of British Columbia – are responsible for monitoring the growth of large pools of barcoded yeast, simultaneously screening 6,000 mutants.

Corey explained: “We first developed a workstation for this work in 2000, which consisted of four Tecan GENios™ microplate readers integrated with a multiprobe liquid handler to monitor the growth of cultures. We chose the GENios reader because it was the only instrument at the time that had a sufficient orbit to keep yeast cells well suspended and that could maintain temperature without condensation. Although this system is still in use, transfer of plates for periodic sampling is very much the rate-¬limiting step of this set-up, so we created a second generation system using Tecan’s Safire™ reader and a Freedom EVO® 200 liquid handling workstation equipped with six shaking incubators.”

“We didn’t just ‘settle on’ Tecan, we purposely selected the Company, and so did all of our collaborators, who loved the growth curves they saw from our work. We have remained with Tecan and, between the Toronto site and a sister laboratory at Stanford University, we now have 24 GENios systems, all of which are still running! The flexibility of the Tecan systems is a big advantage, and our third generation system at the University of British Columbia – with two Infinite® series readers and twelve shaking incubators – will further increase our capabilities,” concluded Corey.