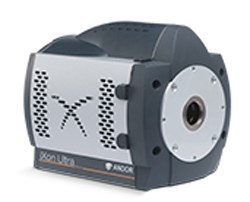 For the first time, a team of scientists, with a novel experiment using an Andor electron-multiplying CCD (EMCCD) camera, have demonstrated quantum imaging with tangible impact for other imaging applications. In the elegant experiment they have improved on the previous ghost imaging and interaction-free imaging approaches by both proving the occurrence of quantum imaging and demonstrating the potential for future applications of this technique.

This method raises intriguing possibilities in a wide range of imaging applications where the wavelength of the photon interacting with the object is a critical parameter. A noticeable example would be the imaging of biological specimens, including living or otherwise highly photolabile samples, which may be more susceptible to certain high-energy wavelengths. This novel work suggests the possibility of using a less damaging wavelength to interact with the object while imaging with a wavelength optimal for the detector; thus creating a route to potentially ground-breaking, low-phototoxicity imaging methods.

The newly-described quantum imaging method is based on the phenomenon of entangled photons – a pair of light particles sharing the same quantum states. These entangled photons can be created by non-linear crystals and then separated by optical means without losing their entanglement. Separating those photons into two distinct optical paths allows for using one beam to image an object “classically” while the other beam does not interact with the object at all.

The imaging beam is infrared (1550 nm), which means the photons interacting with the object are not detected by a silicon-based camera, while we can observe the higher-energy (810 nm) photons form the non-interacting beam. Due to the fact that the 1550-810 nm photon pair shares their quantum states, photons in the non-interacting beam acquire the information about the object without interacting directly with it. This means that ultimately, it is the photons from the 810 nm beam that are detected by the Andor EMCCD camera forming an image.

Reporting their results in Nature, the team from the Institute for Quantum Optics and Quantum Information (IQOQI), the Vienna Center for Quantum Science and Technology (VCQ), and the University of Vienna, have demonstrated that quantum imaging that relies on induced coherence without induced emission is not only theoretically possible but can indeed be realised experimentally. The study shows that knowledge of an object can be extracted from the system in a process in which the directly interacting photon is never detected by a camera.

According to Andor’s Colin Duncan, Application Specialist for Physical Sciences, “The recent study of the Viennese group is incredibly exciting – we can see in these results both the proving of quantum imaging in such an indisputable manner as well as the foundation of a whole new field of quantum imaging techniques. This experiment will undoubtedly break new ground in well-established fields of biomedical and physical imaging in the coming years.”