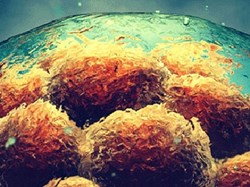 PGT-A is used to identify viable embryos, so the transfer or storage of embryos with an incorrect number of chromosomes can be avoided, as those typically lead to failed IVF cycles. Traditionally, PGT-A requires a biopsy of a developing embryo by creating an opening in the outer coating prior to removal and testing of a few cells. However, recent studies have shown that an embryo releases small amounts of DNA into the culture media in which it is growing, allowing the surrounding fluid to be genetically tested instead.

“Data from a global network of 15 laboratories who have provided samples, shows it is possible to achieve more than 90% correlation between results of biopsied embryo and spent embryo culture media with the PG-Seq Rapid Non-Invasive PGT kit,” said Masoud Toloue, PhD., vice president, Diagnostics, PerkinElmer. “By eliminating the risks associated with performing a cell biopsy, PGT-A becomes more broadly accessible. IVF providers can significantly increase the likelihood of successful embryo transfers and reduce time to pregnancy.”

Do you use PerkinElmer products in your lab? Write a review today for your chance to win a $400 Amazon gift card>>