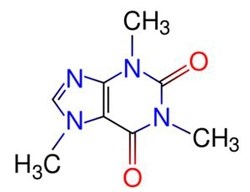 In our last article on the effects of caffeine on sports performance, we looked at the metabolism of the compound and the reasons why it might be beneficial to use the compound ergogenically during sports such as football (see Professor Cameron of the Federal University of the State of Rio de Janeiro discuss caffeine and player performance), and in endurance events such as the Tour de France.

Caffeine benefits
Caffeine enhances exercise and athletic performance, by enabling the athlete to exercise longer until exhaustion occurs. Other positive effects include increased attention, alertness, metabolic rate, and decreased fatigue. In addition to the beneficial effects on muscle, caffeine may alter the perception of how hard you are working, although other some studies have not found this effect. Perceived exertion is very subjective, and there are many things that may influence it. Studies into these benefits have been reviewed by Professor Lawrence Spriet from the University of Guelph, in Caffeine and Exercise Performance.

Moderate to high caffeine doses (5–13 mg/kg bm) ingested one hour before activity increase exercise performance in laboratory- and field-simulations of sporting situations. These effects extend to recreationally and well-trained subjects and are independent of habitual caffeine use, withdrawal of caffeine, high carbohydrate diets prior to exercise, and consumption of carbohydrate during exercise. Recent work suggests that caffeine is ergogenic (performance enhancing) in some short-term high-intensity exercise and team sport simulations. Lower caffeine doses (up to 3 mg/kg bm) taken before exercise also increase athletic performance and recent evidence demonstrated a potent ergogenic effect of low to very low doses of caffeine taken during endurance-based events such cycling and running, particularly in those that are trained.

Lower caffeine doses do not cause changes in the peripheral whole body responses to exercise, are associated with few if any side effects, and have no effect on hydration status and the ability to thermoregulate during exercise. Therefore, as described by this paper, the ergogenic effect of low caffeine doses appears to lie in the CNS. While all human caffeine performance studies have been unable to separate the central effects of caffeine from the peripheral effects, there is direct evidence in rodents that caffeine positively affects the CNS via adenosine receptor antagonism. Recent evidence suggesting that moderate to high doses of caffeine increase the intestinal absorption of carbohydrate during exercise and speed up the resynthesis of muscle glycogen in recovery from exercise is equivocal and unlikely to be of importance at lower caffeine doses (up to 3 mg/kg bm or 200 mg). As caffeine is now a permitted but regulated nutritional supplement, athletes should determine whether the ingestion of 200 mg of caffeine before and/or during training and competitions is ergogenic on an individual basis.

This meta-analysis of pooled data from eight suitable studies does not support any ergogenic effect of caffeine ingestion on repeat sprint performance in team sports.

Variable results and side effects
Individuals’ reaction to caffeine and thus study results vary greatly, despite the known benefits of caffeine in endurance exercise. Differences in metabolism, diet and frequency of caffeine use are some of the factors that can determine how an individual will react to caffeine. Additionally, some athletes may actually experience a decrease in performance, usually due to side effects of caffeine.

Although caffeine does not appear to significantly alter water balance or body temperature during exercise, dehydration is a potential concern because caffeine is a mild diuretic. Some athletes may also experience cardiac abnormalities or abdominal cramps and diarrhea related to the large intestine contractions caused by caffeine. The combination of dehydration and cramping can have particularly detrimental effects on performance.

What about drug testing?
The International Olympic Committee (IOC) currently lists caffeine as a monitored drug. Before 2004, urinary levels up to a concentration of 12 mg/liter were deemed as acceptable by IOC tests, representing casual caffeine use. Differences in metabolism, body weight, body composition, medications and certain diseases may significantly alter the rate in which caffeine is cleared from the body. Some athletes have come close to failing a caffeine drug test after ingesting only 350mg.

Many energy drinks and sports performance gels currently used by professional football players and professional cyclists contain caffeine in varying doses. The levels in different energy drinks are carefully monitored and have been analysed in this study using a micellar electrokinetic chromatography on an Agilent capillary electrophoresis system.

In another study, thin layer chromatography and electrospray ionization tandem mass spectrometry are used to determine caffeine levels in various sports and leisure drinks, to determine if the levels are as described by the drinks’ labels.

In summary, ergogenic use of caffeine to improve sports performance is commonplace. The levels to which caffeine affects an athletes’ performance is dependent on their sporting level, casual use of caffeine, type of sport (endurance or short bursts) and body composition. Benefits of caffeine use for endurance sports such as cycling include glycogen saving and alertness.