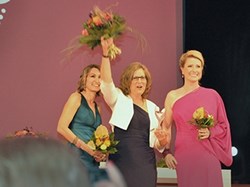 Entrepreneur Alexandra Knauer was announced as the winner of the VICTRESS Succession Award 2018. This category of the VICTRESS award honors women who have mastered the generational change in the management of a family business with great success.

"I am very happy about this award! I like to be a role model and inspiration for other women. I think it would be right if there were more female entrepreneurs and managers in the laboratory equipment industry in the future."

With great dedication and passion, Alexandra Knauer leads in second generation the Berlin-based company - KNAUER Wissenschaftliche Geräte GmbH, with a staff of 135. She did not originally plan to become an entrepreneur. But when the company got in trouble after the German reunification, she wanted to help. A lot had to be changed. She tackled it, set the course to expand the company and make it internationally known. She won the trust of employees and business partners. In her modern production company, she combines tradition and values with the pursuit of innovation and the highest quality. Alexandra Knauer carefully balances opportunities and risks in her company and social responsibility has a very high priority for her and the workforce.

Alexandra Knauer likes to share her experiences e.g. in boards of trustees, committees and supervisory boards to which she was called. She is also the patron of the Zehlendorf-Steglitz network of women entrepreneurs called Connecting Women. A top-class jury from business and media, including Germany’s popular TV presenters Ruth Moschner - Alexander Mazza and fashion designer Jette Joop, was responsible for the selection of the winners in several categories, which were honored by prominent laudators. Through the evening led charming and competent TV presenter Cherno Jobatey.

The VICTRESS gala event brought together decision makers as well as representatives from business, politics and society. After the ceremony, everyone celebrated at the after-show party.

With over 1000 guests, the VICTRESS Awards Gala is not only the first, but also the largest and most successful event in the media on the subject of power women in Germany. Since 2005 it inspires guests, partners and media alike.

The family-owned company KNAUER Wissenschaftliche Geräte GmbH has been developing measuring instruments for research and science for 55 years. The liquid chromatography (HPLC) systems are used for example for testing food or environmental samples on ingredients and impurities or to check the quality of pharmaceuticals. The separation process can also be used for the isolation of natural or active ingredients, that require with very high purity in the final product. The osmometers are used in universities and hospitals.

Do you use products from KNAUER? Write a review today for your chance to win a $400 Amazon voucher.