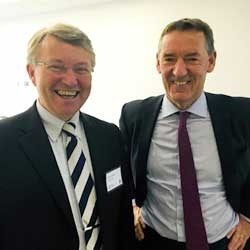 The AMR Centre Ltd (AMRC) has reached an agreement with EligoChem Ltd to co-develop the use of antimicrobial peptides to treat drug-resistant Gram-negative bacteria such as E. coli. The deal is the third that the AMRC, which is based at Alderley Park, Cheshire has backed in 2017, and underlines its key role in the UK’s response to the global health threat posed by the dwindling supply of antibiotics and a growing number of fatalities directly linked to antimicrobial resistance.

EligoChem Limited, based at Discovery Park, Sandwich, has a lead antimicrobial peptide candidate that exhibits potent activity against Gram-negative organisms and which demonstrates low resistance potential and toxicity.  The work is based on research licensed from the University of Colorado.

Dr Peter Jackson, executive director of the ARMC, said: “EligoChem has a promising program which we are going to support by investing our expertise and resources. Antimicrobial peptides are being looked at because the way they work, not necessarily targeting specific molecular receptors on the microbial surface, but rather assuming structures that allow them to interact directly with membranes, means they may be one solution to the problem of resistance to conventional antibiotics.

“The work to date conducted by EligoChem and the University of Colorado has focused on the potential of synthetic peptides - being able to manipulate certain aspects of the synthesis to increase efficacy whilst avoiding potential toxicological and stability issues. The technology has potential across a number of infectious disease areas.”

Dr Andrew McElroy, EligoChem Limited CEO said “We look forward to collaborating with the AMRC who will apply their extensive antimicrobial experience and microbiology resources to expedite the selection and evaluation of a candidate compound for clinical development.”

The AMRC is an alliance partner of CARB-X, a $400m global initiative backed by the US Government and the UK charity the Wellcome Trust.  The US-based National Institute of Allergy and Infectious Diseases (NIAID) provides a range of additional pre-clinical support services

For the EligoChem program CARB-X has made an initial grant award of up to $1.5 million with potential option payments of up to $3.3 million.  The AMRC contribution is in the form of its researcher’s time and access to facilities.