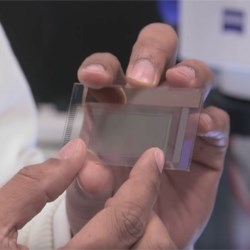 The researchers used their prototype AM-EWOD device to amplify and detect the extended spectrum β-lactamase resistance gene blaCTX-M-15 in DNA extracted from E. coli bacteria. To use the chip, droplets of DNA, RPA reaction mix, magnesium acetate and control are first loaded by pipette into reservoir electrodes, and then aliquots of these, or daughter droplets, are transferred from the reservoirs under software control to predetermined positions on the chip and mixed using a programmed mixing sequence so that the RPA reaction can proceed. After amplification another software controlled sequence transfers the droplets to the fluorescence detection position on the chip.

The reaction droplets are continually shuttled backwards and forwards to speed mixing and the RPA reaction. This continuous mixing improves target DNA detection 100-fold compared with a benchtop RPA assay, professor Morgan says. “The chip was capable of detecting a single blaTX-M-15 gene copy within about 15 minutes.” Using nanolitre-volume droplets also means that about 50 times less reagents are used than are required for a conventional benchtop assay.

Video: Researchers at the University of Southampton describe how the digital microfluidic platform is enabling them to develop efficient and informative clinical diagnostic tools.