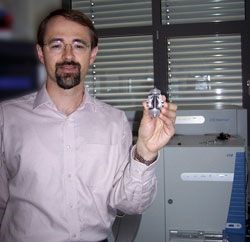 Thermo Fisher Scientific Inc., the world leader in serving science, today announced that Dr. Alexander Makarov, the company's director of global research for Life Sciences Mass Spectrometry, has received the 2008 Distinguished Contribution in Mass Spectrometry Award from the American Society for Mass Spectrometry. The award was presented here today at the 56th ASMS Conference on Mass Spectrometry and Allied Topics.

Dr. Makarov, who has authored more than 30 papers and holds four patents, received the award for his pioneering development of the Orbitrap. The Orbitrap dramatically reduced the size of high-performance mass spectrometers, providing more scientists access to advanced instrumentation and enabling more research into areas including proteomics, life sciences and drug discovery. Mass spectrometry is a technology that allows scientists to separate, identify, and quantify specific substances within a chemical or biological sample.

Dr. Makarov is the second Thermo Fisher Scientific researcher to receive the award in the past decade. Dr. George C. Stafford, Jr. received the award in 2001.

"I am honored to be recognized with the Distinguished Contribution Award and to stand in the company of such remarkable previous recipients," said Dr. Makarov. "As with most scientific advances, this was a team effort and would have been impossible without the creativity and dedication of the Thermo Fisher Scientific R&D teams in both Bremen, Germany and San Jose, California. I gratefully accept this award on behalf of all the scientists who helped make this technology a reality."

"We are very pleased that Dr. Makarov has been honored with this award and we congratulate him and the entire R&D team on the achievement," said Ian Jardine, vice president of global research and development at Thermo Fisher Scientific. "Orbitrap technology has been a tremendous scientific success; it led to the introduction of the hybrid LTQ Orbitrap three years ago and the ExactiveT benchtop LC-MS today, and it will certainly be a key part of future scientific and industry breakthroughs."

Dr. Makarov received his M.S. in molecular physics and his Ph. D. in physics and mathematics from the Moscow Physics-Engineering Institute in Russia in 1989 and 1993, respectively. After that he was a research fellow at the University of Warwick, Coventry, in the United Kingdom, as well as a senior scientific researcher at the Russian Academy of Sciences in Moscow. He began his career with Thermo Fisher Scientific as a research scientist with HD Technologies in 1998, which was later acquired by Thermo Fisher Scientific. During this time, Dr. Makarov led the research and development team for the LTQ Orbitrap mass spectrometer, which was launched in 2005.