Researchers continue to push imaging boundaries from particles to galaxies 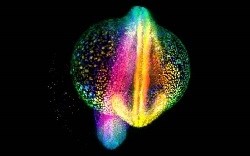 Andor Technology (Andor) and Bitplane, Oxford Instruments companies and world leaders in scientific imaging and spectroscopy solutions, have announced the three visually stunning and scientifically captivating entries to win first place in the 2015 Insight Awards Scientific Imaging Competition. The winning entry in the Physical Sciences category was submitted by Bill Snyder, the Life Sciences category by Gopi Shah of MPI-CBG Dresden and the Imaris category by Mátyás Molnár of Uppsala University.

Bill Snyder’s entry is entitled ‘The Cygnus Wall’ which is in the southern area of NGC7000 also known as the North America Nebula. Acquired using an Apogee U16 CCD camera, it is approximately 1800 light years from Earth, and is in the constellation Cygnus. The Wall is an energized shock front and contains the most concentrated star formations in the nebula.

Gopi Shah’s video entitled ‘Zebrafish Gastrulation’ captures a developing zebrafish embryo from 4 to 18 hours post fertilization where each cell nucleus is labelled with GFP. Cells are color coded for depth to visualize how dynamic cell reorganization gives rise to the body axis of zebrafish. It was captured using a home-built light sheet microscope setup with two Andor Zyla sCMOS cameras used to acquire two opposite views of the sample, which were fused, post-acquisition, to reconstruct the entire embryo in 3D.

The Insight Awards focus on recognizing the cutting edge research carried out by researchers using Andor Technology equipment and Bitplane software in the fields of both Physical and Life Sciences Imaging. This year’s entries utilized the full spectrum of Andor and Bitplane products including spectrographs, EMCCD and sCMOS cameras, Confocal Microscopy Systems and Imaris software.

"I was very impressed with both the quality and quantity of this year’s entries, which clearly highlight the cutting edge work being carried out by researchers using our products" said Dr. Andrew Dennis, Andor’s Director of Product Management. "The judge’s selection of winners provides an interesting insight into the significance and detail of the researcher’s work across multiple scientific disciplines."