SelectScience® is delighted to announce the winners of the 2018 Scientists’ Choice Awards® for General Lab, Separations and Spectroscopy as chosen by scientists from around the globe. Winners and nominees were celebrated during a special SelectScience 20th Anniversary Party yesterday evening at the Pittcon 2018 International Conference and Expo in Orlando, USA. Read on to find out who walked away with the coveted awards this year and for other highlights from this exciting event, which marked 20 years of independent, innovative publishing and shared successes. 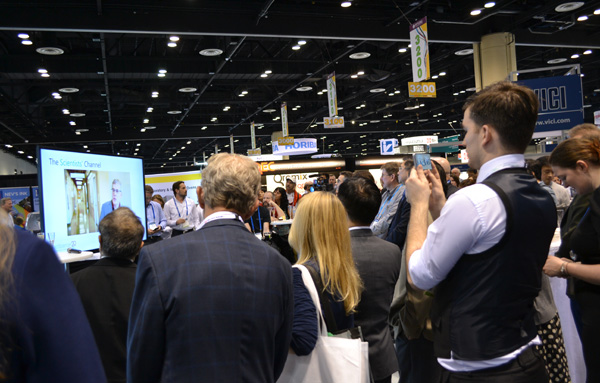 The title of Best New General Laboratory Product of 2017 went to the Milli-Q® IQ 7000 Ultrapure Lab Water System by MilliporeSigma, as nominated and voted for by scientists worldwide.

MilliporeSigma's Renaud Bardon, who accepted the award, said:  “This is a great honour and I want to thank SelectScience for the strong partnership that we have. Having this award from the readers and the users is really important to us. This is the type of recognition that we value the most. We will try to win another one next year!” 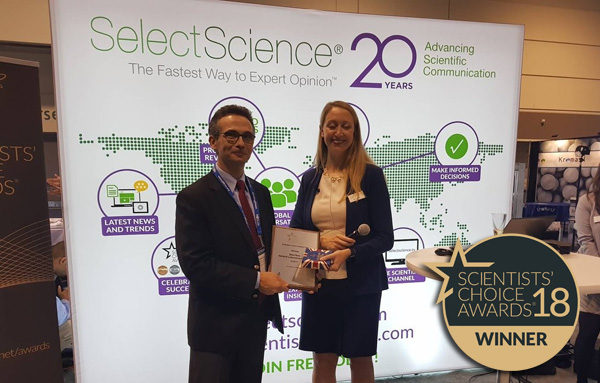 SelectScience announced that the Best New Separations Product of 2017 had been awarded to the 1260 Infinity II Prime LC system by Agilent Technologies, as chosen by scientists across the globe. 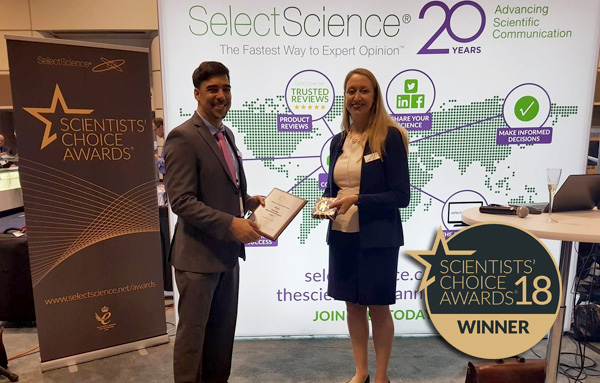 The Best New Spectroscopy Product of 2017, according to scientists around the world who have been nominating and voting for their favorites over the past few weeks and months, was the Ultivo Triple Quadruploe LCMS by Agilent Technologies. 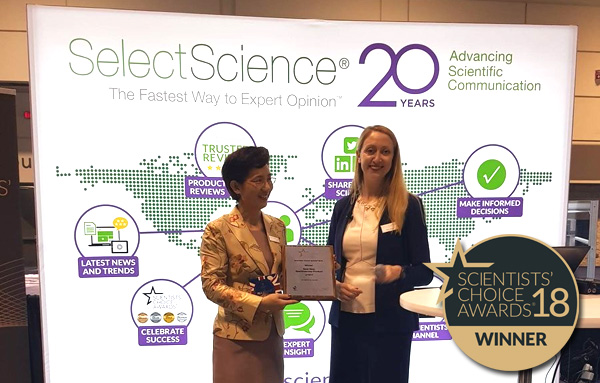 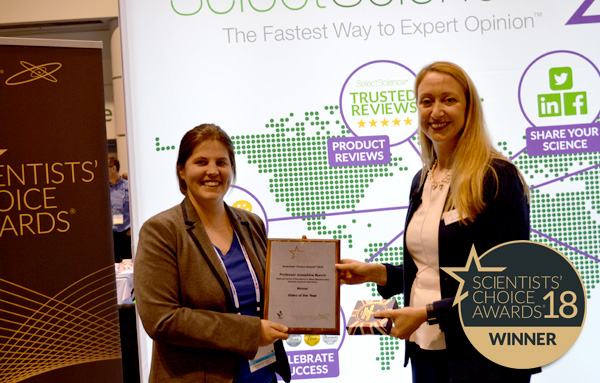 In the prestigous Analytical Science Video of the Year category,  the winning production features Prof. Josephine Bunch, Co-Director of NiCE-MSI at the National Physical Laboratory, UK. The video explores how the latest mass spectrometry imaging from Waters is enabling Prof. Bunch to map tumors at a molecular and cellular level, helping to advance both the diagnosis of cancer and the development of new therapies. Watch the winning video >> 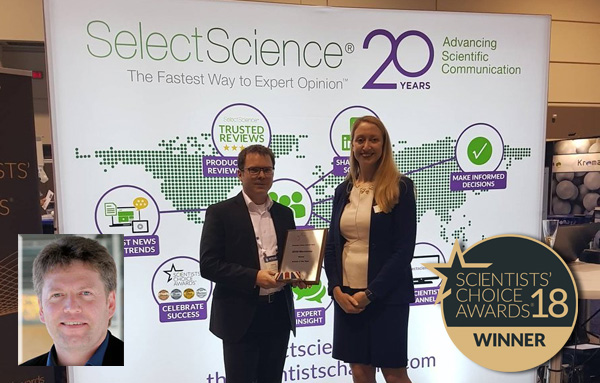 The award for Best Analytical Science Article went to Dr. Timo Bernthaler (inset) and was accepted at the ceremony by Pascal Anger, of ZEISS, which features in the article

The Scientists' Choice Award for Best Analytical Science Article went to 'Could Correlative Microscopy Solve the Energy Problems of the Future?', an in-depth article featuring Dr. Timo Bernthaler, materials scientist at IMFAA, Germany. In the interview Bernthaler discusses his characterization work on energy storage, magnetic and 3D printed materials and how correlative microscopy from ZEISS is accelerating his research.

Dr. Bernthaler told us: “It is with great pleasure that I accept this award and honor on behalf of our research team at the Materials Research Institute (IMFAA) at Aalen University, Germany. It was a pleasure to enhance research into materials for energy conversion, additive processing and energy storage by using correlative microscopic approaches and to explain the relevance of this important research.

"My thanks are also going to Sonia Nicolas and Sarah Thomas from SelectScience, for their professional assistance in producing the interview and the outstanding article. Of course, I would finally like to thank some important members of the IMFAA, Tim Schubert, Andreas Kopp, Andreas Jansche and Gerhard Schneider, for their support and vision to push microscopy into new materials and relevant technologies.” 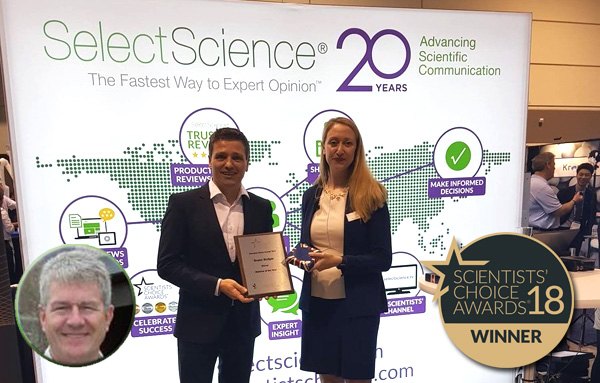 Best Analytical Science Webinar of 2017 was a presention by Dr Clemens Anklin (inset); the award was accepted at the ceremony by Thorsten Thiel, of Bruker.

SelectScience revealed 'Nuclear Magnetic Resonance (NMR) is a Quantitative Method' as webinar of the year, run by Bruker. In the webinar, presenter Dr. Clemens Anklin, explores how NMR can be used to quantify a material, discussing the key parameters and experimental conditions that need to be controlled for accurate results, as well as the advantages and pitfalls of quantitative NMR.

It was the Phenomenex 'Optimize Your HPLC/UHPLC Analysis' email which was named Best Analytical Science Email of the Year. You can see the award-winning email here. 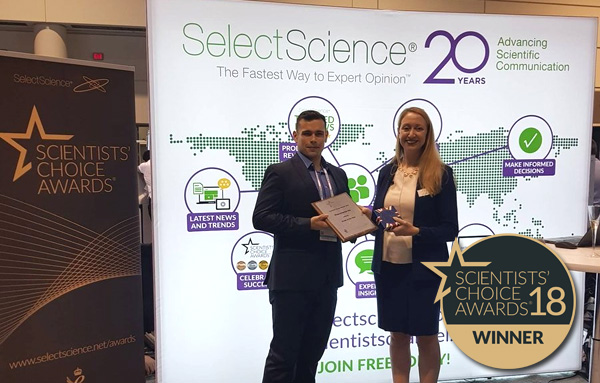 Ryan Splitstone, of Phenomenex, accepts this year's award for Best Analytical Science Email of the Year

The Reviewers' Choice Award for Analytical Science Product of the Year, which is based on reviews published on the SelectScience website, went to VanGuard Column Protection products, by Waters.

SelectScience announced that for a second year in a row, Thermo Fisher Scientific won the Company of the Year and Eppendorf won Customer Service of the Year. 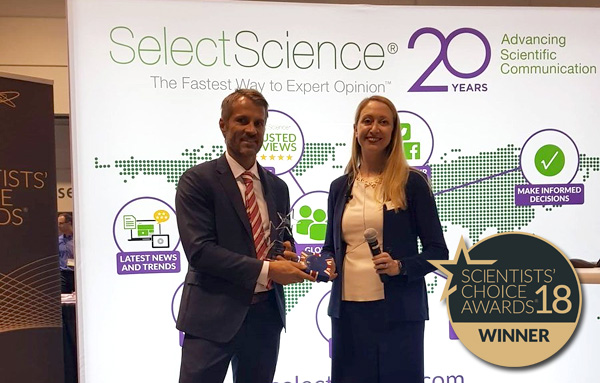 Jakob Gudbrand, of Thermo Fisher Scientific, receives this year's award for Company of the Year 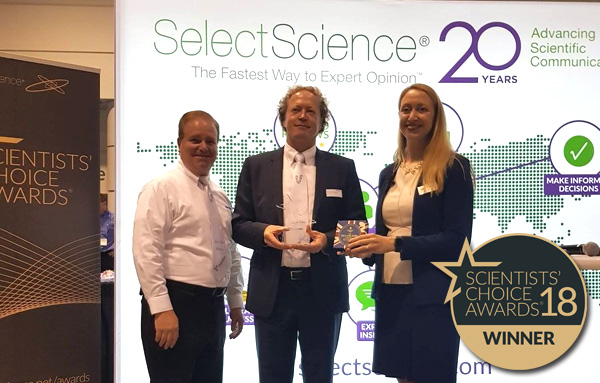 Christian Rohrer (center) and Charlie Villano (left), of Eppendorf, accept this year's award for Customer Service of the Year

Visit the Scientists' Choice Awards website for more information. For news, live updates and interviews from the expo, visit the Pittcon 2018 Special Feature.