Immunotherapy now occupies a position of immense promise in cancer therapeutics. Here, we speak with researchers about the methods they use in immunotherapy projects.

“For many, many, decades, the mainstays of cancer therapy have been surgery, radiation, and chemotherapy. While these modalities are effective in localized and early stage cancers, with few exceptions they are not curative for patients with metastatic cancers, [especially] solid tissue cancers. It has now been demonstrated that immunotherapy can mediate durable responses, and sometimes cures,  in these otherwise incurable cases,” notes Dr. Eric Tran, who focuses on adoptive cell therapy for cancer at the Earle A. Chiles Research Institute at Providence Cancer Institute in Portland, Oregon. Adoptive cell therapy, or adoptive immunotherapy, is a novel approach based on using a patient’s own immune system to fight cancer. 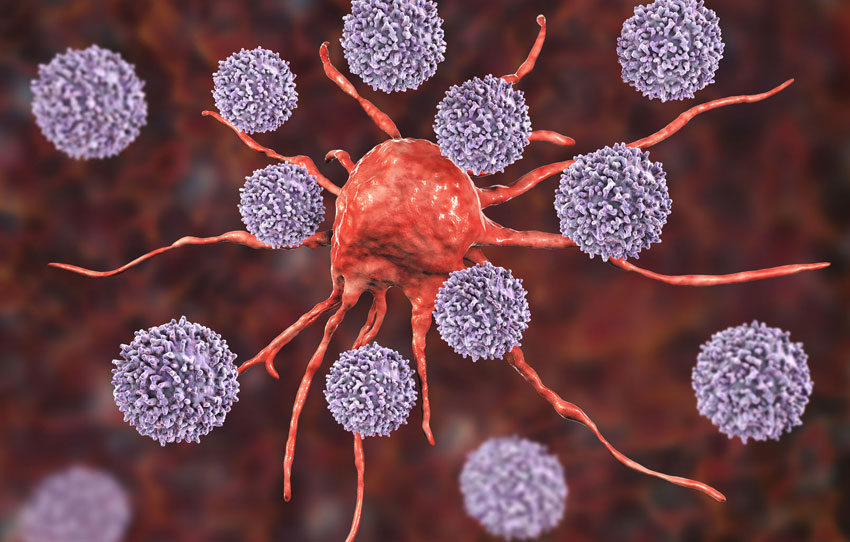 Harnessing T-cell responses against tumors is effective because these cells are highly specific, can be directed precisely to the cancer site, and have a memory, making them long-lasting.

Dr. Tran received his training under Dr. Steven A. Rosenberg, a pioneer in the field, and is at the forefront of studies using adoptive cell therapy. Tran’s laboratory focuses on identifying tumor-reactive T cells and then expanding these cells for re-infusion into the patient with the expectation that these cells will be able home in to the tumor and mediate tumor destruction.

T cells for adoptive immunotherapy can be isolated from either the patient’s blood or the solid tumor and expanded in culture prior to reinfusion to the patient. Cells from the tumor, called tumor-infiltrating lymphocytes (TILs), are usually enriched at tumor sites, compared to the blood where these cells are typically found at low frequencies. The adoptive transfer approach has been used in the treatment of refractory diseases such as metastatic melanoma.1-5

“Most patients with cancer have some T cells in the body that specifically recognize the cancer. Some of these T cells recognize what we call neoantigens, which are antigens that are encoded by mutations expressed by the cancer,” explains Tran. “We’re using a bioinformatics pipeline that enables us to identify these mutations and test whether T cells in each patient can recognize their own unique set of neoantigens.” His laboratory’s goal is to identify T cells that recognize neoantigens from each patient and then harness them using the adoptive immunotherapy approach. 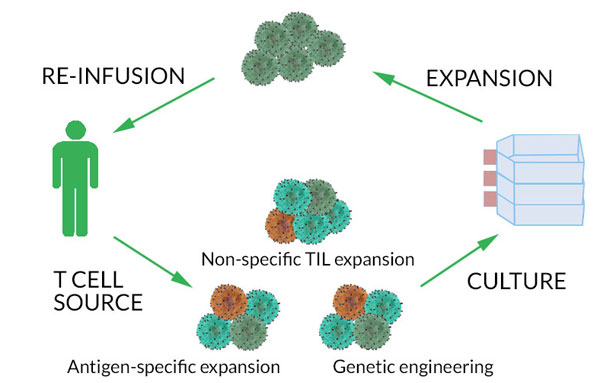 The process of adoptive T-cell immunotherapy involves expanding (tumor-reactive) T cells in culture, and then re-infusing them into the patient. The tumor infiltrating lymphocytes (TILs) shown contain tumor-specific T cells, whereas the peripheral blood lymphocytes usually contain low frequencies of tumor-reactive T cells and thus need to be enriched prior to use in therapy.

A critical step in using TILs for immunotherapy is re-infusing the tumor-reactive T cells into the patient. However, often the cell product that is infused may contain a large proportion of non-tumor reactive T cells. Non-reactive cells, when re-infused into the patient, may actually hinder the immunotherapy effectiveness by competing with the tumor-reactive cells for growth factors. Therefore, it is imperative to identify, select, and isolate these tumor reactive T cells from thousands of other non-reactive ones in preparation for re-infusion into the patient. One approach to address this challenge is to purify the target cells of interest using flow cytometry-based cell sorting. Researchers and clinicians use flow cytometry both to identify and sort the T cells.

Similarly, for the clinical protocols at Fred Hutchinson, “Yield is important, but purity even more so,” states Berger. “We have specific infusion criteria, for example 80%. What we see is that by the time we expand these cells up, if we have anything less than 98% purity, that 2% will outgrow the target population, so we would have to do a second sort before infusing back into the patient.”

“Purity and sterility were the highest priority when considering a cell sorter to be used for therapies in patients. It also needed to be small and easy to use in the clean room environment,” says Miranda Gilchrist, the manager of the flow cytometry core facility supporting dozens of immunotherapy projects at Providence Cancer Institute, including those of Tran’s lab.

Gilchrist continues: “The Sony FX500 cell sorter has disposable fluidics from the specimen sample line to the chip. We can swap out the fluidics for each patient, starting with an irradiated, sterile fluidics line each time. This is very important for the patient’s safety and was one of our main considerations for choosing the Sony FX500.”

It has now been demonstrated that immunotherapy can actually mediate durable responses, and sometimes cures, in these otherwise incurable cases.

Ease of operation is key for scientists working on cell therapy projects. They should not have to depend on just one or two people’s schedules to use a cell sorter to isolate tumor-specific T cells. For example, the flow cytometry core facility at Fred Hutchinson currently serves four adoptive immunotherapy-based clinical trials and a large client base. Ease of training is crucial to enable scientists with varied backgrounds to sort with confidence. “There are probably about 450 different clients for our instruments here, so we do quite a bit of training,” says Berger.

“A large part of our focus is training people how to use [the system] correctly and how to perform analyses. For us, therefore, platforms that are easy to train people on are a high priority. Ease of operation is a huge consideration,” continues Berger. “Multiple people, from different research backgrounds, need to use the machine in our core lab. So, we started the conversation with Sony a while ago now about the limitations of our old cell sorting system. That system wasn’t scalable at all because of the need for expert knowledge to operate it. We couldn’t do more than a couple of sorts a week with that.”

The core facility at Fred Hutchinson recently added the Sony FX500 cell sorter to its array of instruments. “We could train the whole staff on the Sony FX500 – we’ve trained 16 or 17 people. It only takes about 20 minutes to set up the disposable parts of the machine, and it’s guided by a software wizard,” Berger adds. “We’re still [the] subject matter experts, but it’s great to have an instrument that is easy to operate because, now, you don’t have to depend on an expert’s schedule to perform therapeutic cell sorting,” Berger says. “The ease of use and trainability really set the FX500 instrument apart.”

A vision for the future

“The immunotherapy field, in general, is really exciting at the moment. I’ve been doing this for quite a while and have been able to watch purely research projects go on to having direct clinical benefit,” states Berger. “There are new clinical trials coming on board, multiple ones a year. These new adoptive immunotherapies pose less toxicity to the body, so they can really make a difference.”

Most current immunotherapy-based clinical trials involve patients with late stage cancer. One of the potential benefits of adoptive T-cell immunotherapy comes from the chance of implementing it for patients in earlier stages of disease, completely bypassing the need for chemotherapy or radiation. Adoptive immunotherapy projects in research labs face the challenge of scaling up to a clinical setting. As Tran points out: “Unlike standard off-the-shelf chemotherapies or other drugs, generating a cell therapy product is a technically complex process that is highly personalized to each patient. However if these sorts of approaches prove to be effective for treating the toughest of cancers, then methods to streamline the process and the infrastructure to deliver these therapies will surely be developed.”

There are still some hurdles to overcome within the research experiments themselves. Tran continues: “We want to understand the biology of these tumor-reactive T cells better. To increase response rates in patients, we have to understand the tumors and the immune system a little bit better.” Tumors are known to use many molecular mechanisms to evade immune response, thereby rendering immunotherapy efforts futile. “Sometimes tumors develop immune resistance. That’s the next push for immunotherapy — figuring out how tumors evade the immune response, and how we can engineer our therapies to actually overcome those resistance mechanisms”, concludes Tran.