In this SelectScience interview, we talk to Dr. Claudio Ciferri, structural biologist, crystallographer and now head of cryo-EM at Genentech, about drug discovery through investigation of the structure and function of challenging protein targets.

There are many structural biology techniques and Ciferri’s journey to becoming a cryo-EM expert has involved many of them. Working initially on the kinetochore complex, the protein complex that allows the chromosome to be correctly segregated during cell division, Ciferri worked on a handful of its components. “It was very frustrating because the kinetochore is about 100 components and I was working on a complex of four of them. I had to train all these complexes to make them crystallize and was never really able to see the overall picture.”

It was this desire to see the bigger picture that led Ciferri to move into electron microscopy as a field of study and start a successful career elucidating the structures of increasing complex proteins, including uncovering the architecture and subunit organization of the human polycomb repressive complex 2 (PRC2)1. Using electron microscopy, he was able to produce the first three-dimensional image of the PRC2 complex bound to its cofactor, a landmark at the time of its discovery in 2012. Ciferri tells us: “Having the ability to see, for the first time, the complex that others were trying to target for a very long time gave me hope that the field could move into industry and produce the higher-resolution structures needed for of drug discovery.”

In 2011, Ciferri started to see electron microscopy, and more specifically, cryo-EM explode as a field. With Genentech establishing a long-term plan to build the leading cryo-EM lab in industry, he joined to help establish exactly that in the years that followed, building a team of 13 drug discovery scientists and four electron microscopes within the structural biology department. “We knew that cryo-EM was becoming important, so we tried to show that projects that didn’t work at the time could benefit from cryo-EM. So, for the first two years, that’s what I did. Once that was shown, even at low resolution, this provided enough examples to support developing this facility in-house. In a way, it was because the company felt that we had a mandate to help patients as much as possible and deliver structures that we couldn’t otherwise.”

From basic research to drug discovery

Using cryo-EM, we are tackling many targets that otherwise would be impossible to visualize. Nav1.7, for example, is only one of these cases.

The team at Genentech investigates both large and small molecule targets that can be approached by an antibody or chemical compounds in addition to conducting world-class basic research that helps to feed the drug discovery pipeline. One of these projects looked to investigate the structural basis of voltage-sensing, electromechanical coupling, and toxin modulation of the voltage-gated sodium channel Nav1.7, with the aim of enabling the development of selective Nav channel antagonists2. Ciferri tells us about the success of the recently published findings: “We have an interest in targeting Nav1.7 for chronic pain, so the research program came as an additional way to try to target this channel using toxins. This was, of course, initially an academic curiosity that we were able to enable with cryo-EM and publish. But this is something that we can then also use in drug discovery. The two aspects are always very connected.”

While it took many dedicated days and nights to optimize crystallization efforts for Nav1.7, and heroically deliver the first structure of Nav1.7 bound to a toxin, the application of cryo-EM helped to make the publication even more interesting for the field. “This project was happening at the same time that we established the facility, so we looked to see if we could find anything else from a cryo-EM point-of-view. Using this technology, we were able to get activated and deactivated states. Unlike crystallization, with cryo-EM, the particles are in solution and are freely able to adapt to any naturally occurring state.” 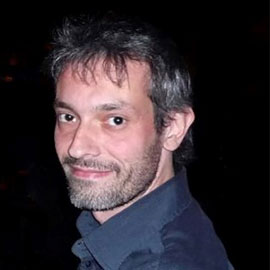 Dr. Claudio Ciferri’s top tips for getting into cryo-EM:

The majority of work at the Genentech cryo-EM facility focuses on single particle analysis (SPA), but microcrystal electron diffraction (microED) and cryo-electron tomography are also high on the list. Ciferri explains: “MicroED has really been upcoming in the past couple of years, but not many people have shown applicability. One aspect of tomography, subtomogram averaging, may be incredibly important in the near future, when it’s shown that this technology can go to comparable resolution as SPA.” The reason for this is that subtomogram averaging, a process of creating a 3D map from a sample containing multiple copies of the same structure to improve resolution, may be able to solve the structure of membrane proteins in human cells and the structure of the channels in their native environment. “While this technology doesn’t deliver the resolution yet, the field is moving so fast that we need to build capability in-house in order to be ready for when that time comes,” says Ciferri.

The cutting-edge facility at Genentech houses some of the best cryo-EM equipment available, in part thanks to high-resolution Thermo Fisher Scientific microscopes. Ciferri describes some of the equipment that enables his research:

The future of cryo-EM

The number of scientists moving into the field, I think, is bringing in a lot of new blood and overcoming a lot of the limitations that the field has.

While cryo-EM delivers structures that are not deliverable with other technologies, it also has its limitations, explains Ciferri. “The major limitation right now is the speed. In the future, both microscopes and data processing will become faster. In my mind, within the next five to ten years we should be able to increase the speed dramatically, and at that point, cryo-EM might become the default technology for many structural biology programs.”

Another improvement could be made in sample prep and grid technology, such as delivering more structures on a single grid to dramatically improve throughput, says Ciferri. “At the moment you put 3-4 µl of your sample on the grid, but you wipe off 99.9% and what is left is exactly what you need. But that means that you’re throwing away a lot of material. There’s some new equipment that’s working on eliminating this pitfall. That could be a game changer in the way that we bring a sample to the microscope.”