Editorial Article: A revolution in diagnostics – The race for five-minute point-of-care PCR testing

Learn how UK-based diagnostics company, LEX Diagnostics, is working with LGC Biosearch Technologies to precipitate a step-change in PCR usability and speed

Molecular diagnostics is an exciting space to work in right now. With the challenges faced at the peak of the COVID-19 pandemic still very fresh in the memory, delivering point-of-care testing with speed, convenience and reliability remains a pressing need in primary care. Being ready with the right technology if, and when, the next pandemic hits is vital. The pursuit of PCR platforms that work in urgent care centers, general practice, and pharmacies – and that produce results within five minutes – would be nothing short of a revolution. Working at that frontier is UK-based diagnostics company LEX Diagnostics, based outside Cambridge in southeast England. We spoke with Andrew Anyakwo, Head of Reagent Development at the company, who understands the challenges of going this fast. A clinical microbiologist by training, Anyakwo is aiming high – for small-scale, affordable PCR testing that delivers reliable results in record time. 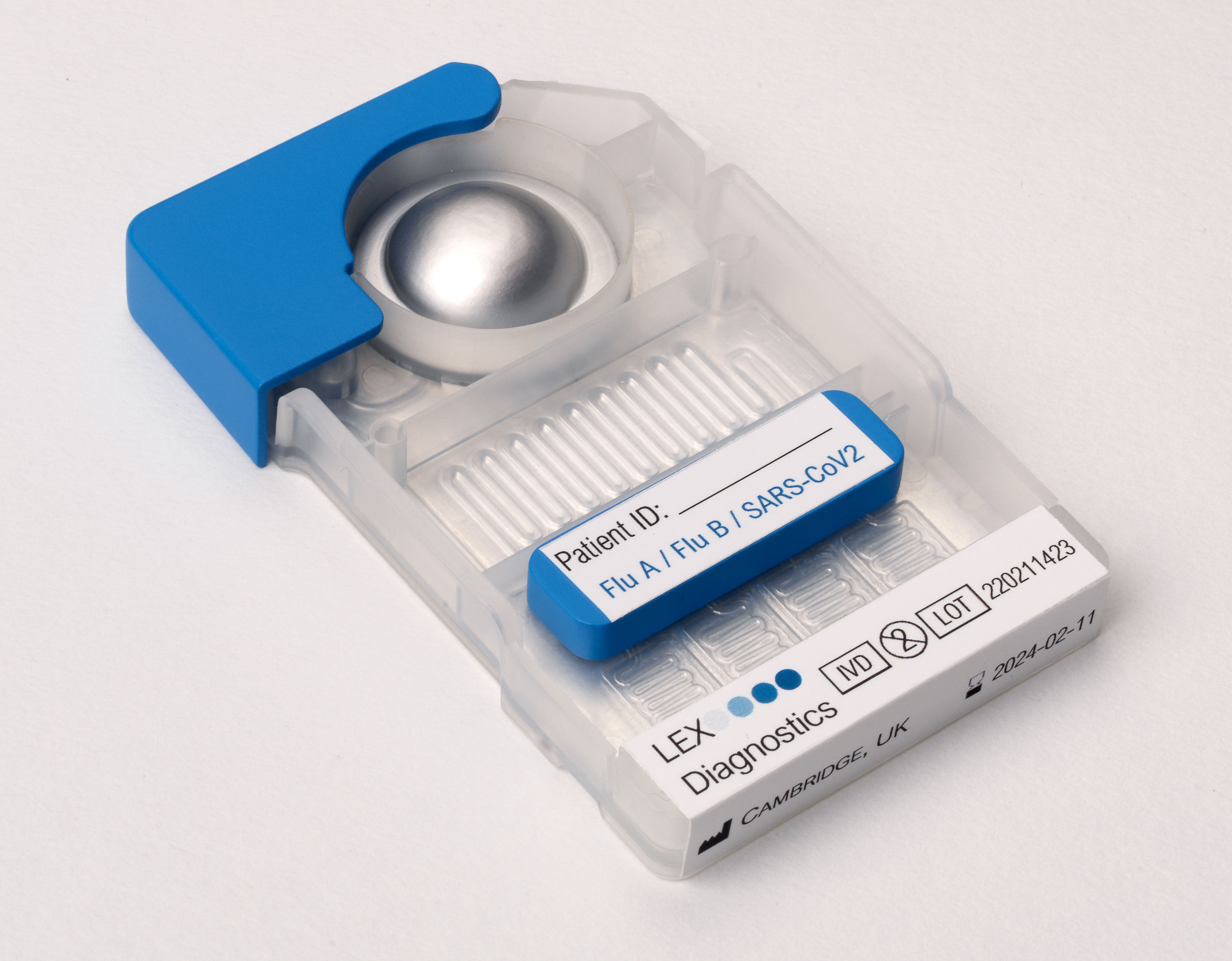 Using proprietary technologies, LEX Diagnostics is developing a platform that will enable laboratory standard molecular diagnostics for the influenza and SARS-CoV-2 viruses in a fully automated workflow within 5-7 minutes. Anyakwo describes his role as “leading the development of a stable elution component that enables viral extraction from a nasal swab, the protection of lysed RNA throughout the test, and the development of a lyophilized PCR reagent mix that is tolerant to the inhibitors in clinical samples.” All of which needs to be suited to room temperature storage.

The company aims to challenge the current antigen market by providing diagnostics at exceptionally low cost, as Anyakwo explains. “My role involves ensuring that reagent development is centered on strategies and components that are low cost, requiring engagement with manufacturers and suppliers,” he says.

The LEX platform is an enclosed, point-of-care device with a consumable that accepts a human nasal swab. Upon insertion into a reader, the swab undergoes the entire process of elution, thermal and chemical conditioning, lysis and DNA amplification. That is far easier said than done, however. It is challenging enough to develop a truly portable instrument reader, but LEX Diagnostics has a number of other hurdles to negotiate.

Amplifying DNA in under five minutes

Anyakwo elaborates upon these challenges, starting with the need for external sample preparation:

“The first major hurdle is to develop a room temperature-stable solution that results in an immediate strip of viral particles bound to a nasal swab on contact,” he explains. “This maximizes the amount of target RNA after the LEX lysis process without the need for a costly instrument with moving parts,” he adds.

The second challenge was to ensure that RNA integrity is maintained in the presence of sample inhibitors prior to reverse transcription. “RNA protection is one of the keys to high sensitivity,” Anyakwo asserts. “We have made strides by developing a novel elution composition and innovative process flows within a low-cost consumable,” he enthuses.

Then there is the challenge of developing complex, low-cost fluidics to support the efficient rehydration of lyophilized RT-PCR reagents and rapid thermocycling. However, the most exciting challenge according to Anyakwo has been “the development of an inhibitor-tolerant RT-PCR reagent mix that supports rapid amplification of four different targets at thermocycling speeds significantly faster than the norm,” he says. “We have made huge strides by developing a novel combination of different components that improves RT-PCR sensitivity and offers inhibitor tolerance at fast cycling speed,” Anyakwo adds.

The core of LEX Diagnostics’ platform centers around its heating and cooling strategy, which ensures that samples can be heated much faster than conventional platforms (and with greater uniformity) and then cooled just as fast, as Anyakwo explains:

“This ability to rapidly ramp to required temperatures and cool just as fast has been critical in selecting and optimizing the combination of reagent components that are required to support high sensitivity amplification in the presence of sample inhibition,” he says.

Achieving fast amplification requires significant innovations in the composition of the RT-PCR reagent base mix, and that is where Biosearch Technologies’ expertise has been very valuable. From Biosearch Technologies, Dr Oliver Watts has been on the journey with the team at LEX. As a scientist on the company’s custom enzyme solutions team, Watts partners with companies to develop and optimize molecular diagnostic assays, taking advantage of the flexibility of the robust enzyme portfolio at Biosearch Technologies. He has served as an expert consultant as the LEX team worked through the challenges of developing an RT-PCR master mix able to meet the unique demands of fast, sensitive point-of-care PCR testing, as Anyakwo explains:

“They [Biosearch Technologies] have supported our strategy with custom reagents aimed at point-of-care PCR technology,” he asserts. “LGC also have proven capacity for oligo manufacture at scale, and the LEX manufacturing team works closely with them, taking expert advice.”

Anyakwo explains that the immediate future for LEX Diagnostics is to launch its new influenza/SARS-CoV-2 platform into primary care settings, for it to be faster than the corresponding antigen test, and also close enough in cost for PCR testing to become the norm in clinical settings. Looking further into the future, he adds:

“We aim to broaden our test menu, expand the number of pathogens we can detect in a single test, and look to establish assays for other respiratory diseases such as RSV and Strep. We aim to become the gold standard for low-cost, high-sensitivity rapid diagnostics,” he enthuses.

For molecular diagnostics more generally, Anyakwo proposes an intriguing future vision. “Testing of all kinds will move increasingly towards the point-of-care, just as computing moved to the desktop from centralized computers. Lab tests won’t go away completely, but they will remain only for the most complex tests that can’t be performed near the patient,” he asserts. “We will also see a move towards syndromic testing in primary care – as reagent costs fall, the number of pathogens tested for in each sample will move towards the 20+ levels seen in hospital-based systems,” he concludes.

Learn more about LEX Diagnostics and their work with LGC Biosearch Technologies, and understand how the RapiDxFireTM Lyo-Flex 1-Step RT-qPCR 5X Master Mix could help you.