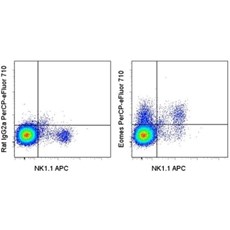 EOMES monoclonal antibody (Dan11mag) recognizes Eomesodermin (EOMES), also known as T-box brain 2 (TBR2). EOMES is a T-box transcription factor that is highly homologous to T-bet, which is essential during trophoblast development and gastrulation in most vertebrates. In the immune system, EOMES controls the differentiation of effector and memory CD8+ T cells, as well as natural killer (NK) cells. Expression of EOMES in these cells correlates with high expression of CD122, the common beta-chain of the IL-2R and IL-15R. This EOMES monoclonal antibody (Dan11mag) is labeled with PerCP-eFluor 710, which excites at 488 nm using a blue laser and emits at 710 nm. It has been tested in flow cytometry applications.