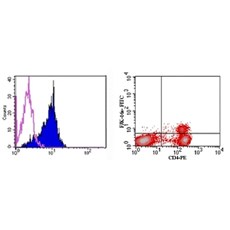 The Foxp3 monoclonal antibody (FJK-16s) reacts with mouse, rat, dog, porcine, bovine and cat Foxp3, a 49-55 kDa protein also known as FORKHEAD BOX P3, SCURFIN, and JM2. Cross reactivity of this antibody to other proteins has not been determined. Foxp3 is a member of the forkhead/winged-helix family of transcriptional regulators. It appears to be involved in the X-linked lymphoproliferative disease observed in scurfy (sf) mice and in the human disorder, X-linked autoimmunity-allergic dysregulation syndrome (XLAAD). CD4+CD25+ regulatory T cells constitutively express Foxp3 mRNA, and ectopic expression of Foxp3 in CD4+CD25- cells. The FJK-16s antibody epitope has been mapped to amino acids 75-125 of the mouse Foxp3 protein. In the human, this region has been shown to be alternatively spliced at the mRNA level. Both the alternatively-spliced and non-spliced isoforms are present in the CD4+CD25+ subset of lymphocytes. Preliminary RT-PCR experiments have not revealed this alternatively-spliced isoform in mouse splenocytes, suggesting different gene regulation in the mouse and human. This Foxp3 monoclonal antibody is labeled with FITC, which excites at 488 nm using a blue laser and emits at 520 nm. It has been tested in flow cytometry and immunohistochemistry (frozen samples) applications. The antibody has been optimized for use with the Foxp3/Transcription Factor Buffer Staining Set (#00-5523).