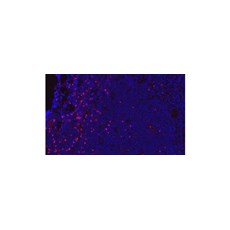 The Foxp3 monoclonal antibody (FJK-16s) reacts with mouse, rat, dog, porcine, bovine and cat Foxp3, a 49-55 kDa protein also known as FORKHEAD BOX P3, SCURFIN, and JM2. Cross reactivity of this antibody to other proteins has not been determined. Foxp3 is a member of the forkhead/winged-helix family of transcriptional regulators. It appears to be involved in the X-linked lymphoproliferative disease observed in scurfy (sf) mice and in the human disorder, X-linked autoimmunity-allergic dysregulation syndrome (XLAAD). CD4+CD25+ regulatory T cells constitutively express Foxp3 mRNA, and ectopic expression of Foxp3 in CD4+CD25- cells. The FJK-16s antibody epitope has been mapped to amino acids 75-125 of the mouse Foxp3 protein. In the human, this region has been shown to be alternatively spliced at the mRNA level. Both the alternatively-spliced and non-spliced isoforms are present in the CD4+CD25+ subset of lymphocytes. Preliminary RT-PCR experiments have not revealed this alternatively-spliced isoform in mouse splenocytes, suggesting different gene regulation in the mouse and human. This Foxp3 monoclonal antibody is labeled with eFluor 570, which excites at 555 nm and emits at 570 nm. It has been tested in immunocytochemistry (ICC), immunofluorescence (IF), and immunohistochemistry (paraffin-embedded and frozen samples) applications.