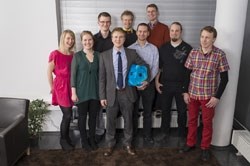 Earlier this year, Frost & Sullivan, the global research organization, awarded ArcDia the European Respiratory Infection Disease Point of Care Product Leadership Award 2014, for its mariPOC product line. The mariPOC® is an automated continuous-feed analyzer, which allows prompt detection of most common viral and bacterial pathogens responsible for influenza-like infections and tonsillitis, both in POC and laboratory settings.

SN: There is a lot of discussion about the clinical need for rapid POC testing and an increasing trend towards this type of analysis. Do you see that the market is really moving in this direction?

JK: Indeed, opinion leaders and the scientific community have strongly called for rapid POC test methods for a few decades. For example, it is a scientific fact that rapid multianalyte tests are needed to diagnose and treat respiratory tract infections accurately and in a timely manner. Such tests are also needed to tackle the problem of overusing antibiotics for the common cold and bronchitis. However, it seems that the change in clinics and labs is taking much longer than the industry or healthcare officials ever anticipated. One big hurdle for a long time was the sheer lack of products that would meet clinical needs.

The need for a certain kind of product is one thing, but the reality is something else. National guidelines and policies change slowly and they usually reflect the prevailing operating environment, not the hopes of the future or the possibilities offered by new solutions. Even today, in some European countries routine POC testing is completely unheard of. We see that there is a clear trend towards rapid POC testing, but the realization of this trend is taking much more time than anyone anticipated, even now that rapid multianalyte methods are available. In addition, laboratories and clinics may have recently signed supply contracts for two-three years, so the market is slow to change.

Another factor that affects the adoption of new processes is the interplay between clinics and laboratories. The stakeholders might have very different objectives in the use and choice of diagnostics tools. What is good for the laboratories, or in their opinion, might not be optimal for the clinics. Laboratories might be worried about in vitro diagnostic tests entering the policlinics and being operated by other than lab personnel. Luckily, new automated rapid tests such as mariPOC®, can also provide added value in POC testing from a quality assurance perspective.

SN: How do you see the evolution of bacterial rapid diagnostics occurring in the future? Can we expect some major changes in the processes and techniques applied in the field?

YK: MALDI-TOF mass spectrometry has entered microbiological labs during the recent years and revolutionized bacteriology in many ways. However, it has little value to add to the rapid diagnostics of the most common acute respiratory infections. ArcDia has launched a supersensitive and rapid mariPOC® test for Group A streptococci. The reporting level of the test is approximately 300 CFU/ml, while the lowest limit of detection is as low as 100 CFU/ml. The clinical studies performed in Finland and led by Docent Jukka Vakkila from Mehiläinen Ltd, the leading private health care provider in Finland, have shown that the mariPOC® test finds twice the amount of clinically significant infections compared to, not only lateral flow rapid tests, but also to culture. This means that, for the first time in the world, clinicians can truly rely on negative rapid test results. The patients and clinicians no longer have to wait for a couple of days for the correct treatment decision.

Only at this very moment are PCR tests for Group A streptococci coming to the market. The data available for these tests, for example, in the scientific studies presented in ECCMID 2014, and in the product specifications, suggest that the sensitivity level that PCR can reach is very close to that of mariPOC. At first glance, this is somewhat surprising considering the fact that mariPOC is based on antigen detection. ArcDia has already shown that the automated fluorescent mariPOC® antigen test is more sensitive than culture and its cost structure is moderate. So the experts are now suggesting that a new gold standard may be arising.

SN: Can you tell us more about the mariPOC® system and how it works?

JK: Current rapid test products based on lateral flow techniques do not enable the multianalyte identification that is needed for the efficient testing of respiratory infections. In contrast, ArcDia’s recently launched mariPOC® platform is a fully automated rapid POC test system that allows multianalyte testing of pathogens from swab samples. The test provides results for most positive cases in 20 minutes. Low positives and negative results are reported in two hours. Thus it combines speed and laboratory level accuracy. The easy-to-use system allows random-access analysis of patient samples and is typically operated by nurses in policlinic departments, or by laboratory technicians in the emergency laboratory.

mariPOC® is based on our proprietary technology applying two-photon excitation fluorometry and concentration of antigens and fluorescent tracer on microspheres by antigen-antibody reactions. The technology utilizes microvolume reaction chambers (20 µl), dried reagents, and a separation-free fluorescent measurement, which means that the technology allows real-time follow up of bioaffinity reactions. Furthermore, antigen testing does not need any special treatment for the sample, and these properties make the protocols very simple. Moreover, the technology enables an exceptionally sophisticated autoverification to assess technical reliability of the sample analysis.

SN: At ECCMID 2014, Barcelona, Spain, you displayed the world’s first antigen assay for bocavirus; can you tell us more about this assay?

JK: Human bocavirus is a DNA virus found in 2005. The virus has ever since been a target of intensive research. According to studies, virtually all children under the age of six have had an infection caused by type 1 virus and it has been associated with mild to severe respiratory tract infections.

mariPOC® is known as a highly specific antigen detection method for acute respiratory infections. ArcDia offers the bocavirus test as a part of mariPOC® respi multianalyte test, which detects 10 clinically relevant viruses and bacteria from a single swab sample. ArcDia’s test is the first antigen test available for this virus and it is the first rapid test on the market. It is yet another indication that we are at the very front line of developing new diagnostics for the most common diseases on Earth.

SN: What are the advantages of using immunoassay techniques for the detection of bocavirus?

JK: So far, bocavirus has been detected, mainly by PCR methods from critically ill patients. These tests are sensitive but result in high numbers of clinically insignificant positive findings; presumably because detecting DNAemia means positive results, also in case of persistency, latency, and long term shedding. Doctors do not know what to do with positive PCR results, especially as bocavirus is often reported together with one-two other viruses. Serodiagnostic tests for bocavirus have been proven to be accurate, but they are not suitable for rapid diagnostics. Due to these challenges in accurate and rapid diagnosis of the virus, acute infections are not routinely diagnosed in clinical practice.
A sensitive antigen test could, for the very first time, provide both rapid and accurate point-of-care diagnostics for human bocavirus by finding only the clinically relevant acute infections. It is generally known that antigen testing has high specificity because it targets the replicating virus.