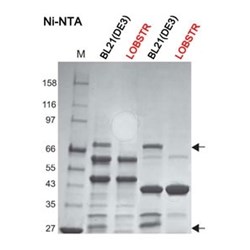 Traditionally, a major drawback to using polyhistidine-tag affinity purification for proteins expressed in E. coli is contamination resulting from the presence of two naturally histidine-rich proteins in E. coli, ArnA and SlyD. LOBSTR (low background strain) is an E. coli strain for the expression of recombinant polyhistidine-tagged proteins that addresses this challenge.

LOBSTR is based on BL21(DE3) and can be used like other commercially available competent cells. A BL21(DE3)-RIL version is also available, which contains extra copies of the argU, ileY, and leuW tRNA genes, as well as a chloramphenicol marker. 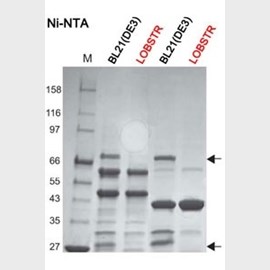