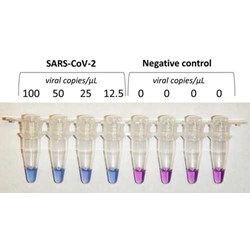 6 regions specific to the SARS-CoV-2 N gene. The regions selected for amplification do not share homology to nucleocapsid genes from any other coronaviruses.

This assay utilizes reverse transcription loop-mediated isothermal amplification (RT-LAMP), which amplifies SARS-CoV-2 RNA without the need for thermal cycling. This is accomplished using specialized primers that enable continuous amplification of nucleic acids at 60°C. RT-LAMP is faster than traditional RT-PCR with a colorimetric endpoint readout. Thus, detection of viral RNA can be performed by eye or with a plate reader capable of reading absorbance at 570 nm and 650 nm.

This kit uses six primer-probe sets specific to the SARS-CoV-2 gene encoding for the nucleocapsid protein. The regions selected for amplification do not share homology to nucleocapsid genes from any other coronaviruses. 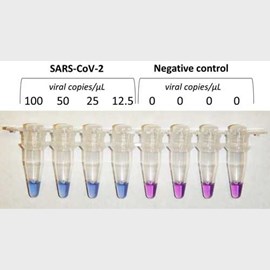