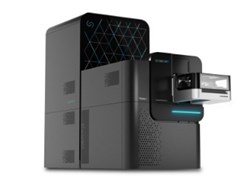 Waters Corporation has introduced the Waters™ SELECT SERIES™ MRT, a high-resolution mass spectrometer that combines Multi Reflecting Time-of-Flight (MRT) technology with both enhanced DESI and new MALDI imaging sources. Together, these technologies enable scientists to explore molecular structure and function through the precise identification and localization of individual molecules in samples, with a unique combination of speed, resolution, and mass accuracy.

For example, a scientist researching how an investigational oncology drug interacts with its intended target, such as a specific brain tumor receptor, can now do so much faster, at speeds up to 10Hz without compromising mass accuracy or resolution.

“The Waters SELECT SERIES MRT opens the door to a greater understanding of molecules and their mechanisms of action in numerous scientific fields,” said Dr. Udit Batra, CEO and President, Waters Corporation. “The clarity of images produced by this instrument can yield profoundly important molecular information to scientists in research areas such as targeted therapeutics, to provide insights and enable deep biological discoveries.”

The SELECT SERIES MRT platform is the basis for the next generation of Waters’ high-resolution mass spectrometers. It is the first commercially available instrument of its kind that is capable of attaining 200,000 Full Width Half Maximum (FWHM) resolution and part-per-billion mass accuracy independent of scan speed. The superior performance of the SELECT SERIES MRT allows scientists to get the highest quality mass spectrometry data and information faster than any commercial mass spectrometer on the market todayii. The new Multi Reflecting Time-of-Flight technology features an extended flight path of almost 50 meters to give scientists a much clearer picture of structural information, including fine isotope structure.

DESI XS and MALDI Imaging on a Single MRT Platform

The first application of the SELECT SERIES MRT unlocks the potential of MS imaging using DESI and MALDI ionization. DESI is a direct-from-sample, soft ionization technique performed under ambient environmental conditions, requiring no prior sample preparation. It provides imaging information about the biochemical distribution of small molecule drugs, lipids, and naturally occurring metabolites within a slice of tissue or on other sample surfaces after just a single measurement. Scientists are applying DESI today to research breast and ovarian cancer, to study drug metabolism and pharmacokinetics (DMPK), to investigate the function of key metabolites in natural products in traditional medicines, and to get a closer look at the biotransformation of bacterial colonies after gene modifications.

For scientists interested in conducting MALDI imaging experiments, the SELECT SERIES MRT is available with a newly designed MALDI source. MALDI is an ideal complementary technique for the imaging of biological molecules such as peptides and can visualize tissue sections at spatial resolutions of less than 10 microns. Taken together, the combination of imaging sources gives researchers the means to generate fine spatial information and morphological detail for biological samples and even visualize brain vasculature. Customer shipments of the SELECT SERIES MRT are expected to begin in the fourth quarter of this year.

Do you use Waters Corporation products in your lab? Write a review today for your chance to win a $400 Amazon Gift Card>>