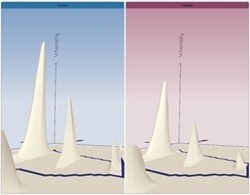 The new features of Progenesis QI Version 2.0 include Pathway Mapping, which facilitates the process of placing discoveries into a biological context, extracting maximum value from 'omics data; Workflow Automation, which enables the software to move through multiple processing stages without user intervention, thus saving valuable time and allowing for overnight and weekend processing; Improved access to compound databases, increasing the chance of successful compound identification; and seamless integration with the extended statistics functionality in EZInfo 3.0, with two-way dataflow to allow for flexible data mining through a single, menu-driven command.

“Discovery is nothing without understanding,” said Dr. Rohit Khanna, Vice President of Informatics and Worldwide Marketing for the Waters Division. “The new version of Progenesis QI features interface improvements that make working with the software even faster and more intuitive than before, giving users more confidence in their research and a deeper understanding of the results.”

Progenesis QI Version 2.0 provides an easy-to-learn, intuitive workflow that is flexible and based on how researchers function. It has a highly-visual interface. The expanded functionality has broad applications across a wide variety of areas including pharmaceutical, health sciences, food, environmental and chemical research.