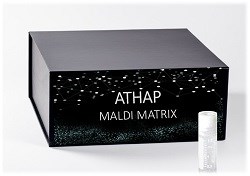 Many putative disease biomarkers are membrane proteins containing hydrophobic regions. These hydrophobic peptides, however, are frequently excluded from target analyte lists because of the difficulty in MS-based detection. Difficulties in LCMS are likely due to low solubility. Low sensitivity in MALDI-TOF MS experiments is likely to be caused by reduced ionization efficiencies of these hydrophobic peptides/proteins using conventional MALDI matrices, such as α-Cyano-4-hydroxycinnamic acid (CHCA), sinapinic acid (SA) and dihydroxybenzoic acid (DHB).

“Hydrophobicity is a key driving force for the integration of transmembrane segments of proteins/peptides into lipid bilayers, and these new ATHAP matrix kits offer researchers an unprecedented opportunity to interrogate the biological and physical-chemical characteristics of these important analytes,” said Scott Kuzdzal, Ph.D., of Shimadzu Scientific Instruments. “These kits will increase detection sensitivity, unlocking a better understanding of the structure and function of these vital hydrophobic molecules, with applications ranging from antimicrobial peptides to cancer protein biomarkers.”

ATHAP matrix was developed in partnership between Hiroshima University and the Koichi Tanaka Laboratory of Advanced Science and Technology and licensed to Shimadzu Scientific Instruments. This research is supported by the Japan Society for the Promotion of Science (JSPS) through its “Funding Program for World-Leading Innovative R&D on Science and Technology (FIRST Program)."