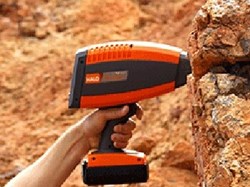 These selections represent some of the initial steps towards advancing scientific study and exploration of Mars due to the wealth of compositional information VIS-NIR-SWIR (visible - near-infrared – short-wave infrared) spectroscopy can provide. The recent research projects selected the ASD handheld VIS-NIR-SWIR full-range (350 to 2500nm) spectrometer to be utilized as a terrestrial analog instrument for the collection, analysis and interpretation of geological and mineralogical data. Mineralogical variations are significant because geochemical differences contain clues regarding whether a geologic environment was habitable or capable of preserving evidence of prior life. Without in-situ VIS-NIR-SWIR data, there could be missed critical information for scientific missions and interpretations.

“It is exciting to see the TerraSpec Halo contributing towards the advancement of planetary field geology research,” said Katherine Macchiarola, Marketing Director – Americas at Malvern Panalytical. “Having a full-range spectrometer in the palms of their hands producing immediate on-instrument results allowed these researchers to quickly assess the analog terrain of interest.”

“With NASA ramping up to go back to the Moon, to Mars and beyond, there’s a need for people to be well versed in planetary field geology,” said Dr. Ulyana Horodyskyj, scientist and co-teacher of Project PoSSUM’s citizen-science course. “The best we can do, at the moment, is study extreme environments on Earth that are going to be the most similar to Mars.”

A NASA-sponsored research project, the GeoHeuristic Operational Strategies Test (GHOST), including scientists from University of Colorado Boulder selected the ASD TerraSpec Halo to maximize the speed, efficiency and scientific return of Mars rover sample collection. The program used the spectrometer to simulate the function of the Mars Science Laboratory (MSL) ChemCam and Mars 2020 rover SuperCam. During the research project, the TerraSpec Halo allowed for rapid data acquisition of in-situ outcrops, similar to the data gathered by Mars rovers, and allowed the rover operations team to rapidly traverse the field site near Salt Lake City, Utah, maximizing the number of data points gathered.

Project PoSSUM (Polar Suborbital Science in the Upper Mesosphere), a 501(c)(3) astronautics research and education program studying our upper atmosphere and its role in our changing global climate, allows citizen-scientists to participate in research and education programs. One recent Project PoSSUM course, entitled “Planetary Field Geology and EVA Tool Development,” allowed student researchers to use the ASD TerraSpec Halo to gather spectral measurements at the San Francisco Volcanic Field in northern Arizona and identify alteration minerals, which is key for when scientists and astronauts eventually do get back to the Moon and/or go to Mars, and are looking for traces of water.

“One of NASA’s key goals is to search for life beyond Earth, and Mars is a key target in that mission,” said Dr. Brian Hynek, associate professor in the Department of Geological Sciences at the University of Colorado Boulder. “Consequently, Mars is one of the closest, easiest places to explore. NASA has gone from characterizing where the water existed with earlier missions to now actually starting to address the question of whether or not Mars ever had life."

Do you use Malvern Panalytical products in your lab? Write a review today for your chance to win a $400 Amazon gift card>>