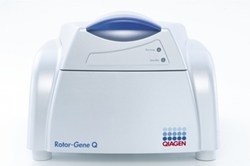 QIAGEN N.V. has announced that its artus® CMV RGQ MDx Kit for human cytomegalovirus (CMV) has been approved by the U.S. Food and Drug Administration (FDA) under a full premarket approval (PMA). The test is the only FDA-approved PCR-based assay optimized for low- to mid-throughput testing of CMV. With a turn-around time of approximately three hours, the assay provides faster results than other PMA approved tests. artus CMV RGQ MDx runs on QIAGEN’s Rotor-Gene Q MDx real-time PCR platform, which was cleared by the FDA in 2012 and is a member of the QIAsymphony modular family of automated instruments.

“We are very pleased to add yet another FDA approved diagnostic kit to our menu of FDA approved or cleared content for a core element of our flagship QIAsymphony modular family of automated instruments. This flexible platform is driving the dissemination of molecular diagnostics by delivering efficient, reliable workflows in low- to mid-throughput settings, which represent the largest market opportunity in terms of placements,” said Peer M. Schatz, Chief Executive Officer of QIAGEN. “Our artus CMV assay is the fastest test approved for quantifying CMV viral loads in organ transplant patients. In addition to helping save lives with its clinically proven usefulness, the FDA-approved artus test creates economic value by reducing the time and money many labs and hospitals currently must spend validating lab-developed CMV tests and analyte-specific reagents. More than one million CMV tests are performed on U.S. transplant patients each year and we believe the artus CMV kit will provide significant value for laboratories, patients and the healthcare system.”

CMV testing is primarily used as an aid in the management of solid organ transplant patients to assess viral load in response to antiviral drug therapy. These patients are at high risk of life-threatening CMV infections in the months following surgery, and antiviral drug treatment is standard. Between 20% and 60% of all transplant patients, depending on patient and procedure, are repeatedly tested for CMV throughout the first year following transplantation.

Expanding the menu for QIAsymphony

QIAGEN is delivering on a broad pipeline of tests targeting regulatory clearance and approval for use on the QIAsymphony modular family of automated instruments. Approximately 40 molecular diagnostics are already today available in various markets for use on the QIAsymphony platform and its modules, and about 35 new tests are currently in development for a variety of targets in disease areas such healthcare-associated infections, women’s health, transplantation, personalized healthcare, oncology and blood- borne viruses.

With more than 25 CE-marked assays, QIAGEN offers the industry’s broadest test menu in Europe, including more than 10 assays for personalized healthcare and more than 15 assays in women’s health, blood-borne virus and other disease areas. The CE-marking of artus® GBS QS-RGQ Kit for detection of Group B Streptococcus (GBS) represents the most recent addition to QIAGEN’s growing QIAsymphony test menu. The test was developed in partnership with Intelligent MDx. For healthcare-associated infections, QIAGEN already offers the CE-marked artus VanR QS-RGQ Kit for vancomycin-resistant bacteria, the artus C. difficile QS-RGQ Kit and the artus MRSA/SA QS-RGQ Kit for detection of methicillin-resistant Staphylococcus aureus infections (MRSA). Furthermore, a women’s health assay for the detection of Trichomonas is planned for 2014 in Europe.

In the United States, QIAGEN is building a growing menu of approved or cleared assays for the QIAsymphony automation family in a number of focus areas including companion diagnostics, healthcare-associated and transplantation-related infections. To date, the FDA has granted three PMA approvals for companion diagnostics developed by QIAGEN to guide treatment of various cancers with targeted drugs. For healthcare-associated infections, the FDA has cleared the U.S. application for artus C. difficile QS-RGQ MDx kit, and artus assays for VanR and MRSA have been or will be submitted to the agency for regulatory clearance. Further 510(k) submissions planned include women’s health assays for the detection of CT/NG and Trichomonas infections as well as for HSV 1/2, which is expected for July 2014.

The assays listed above represent important menu items for use in the low- to medium throughput testing segments (e.g. pathology, esoteric testing, hospitals, medium to low throughput laboratories), which in terms of placements are estimated to in sum represent the largest market opportunities. The QIAsymphony modular family of automated instruments has ideal features and specifications for customers in these market segments, including random access and continuous loading of samples. The full QIAsymphony RGQ MDx platform has been cleared by the FDA earlier this year. For 2014, QIAGEN is targeting 250 new system placements worldwide, building on the more than 1,000 cumulative placements at the end of 2013.