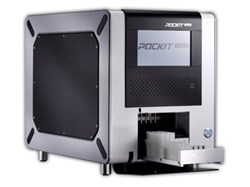 HORIBA UK Limited has announced that it has launched a number of new pathogen PCR tests for its POCKIT™ Central* in-house veterinary PCR analyzer. In addition, HORIBA has released for on-demand viewing its recent Veterinary CPD webinar in which the value of in-house PCR analysis for pathogen screening is discussed with the Head of ESCCAP (European Scientific Council for Companion Animal Parasites) UK & Ireland, in conjunction with the importance of screening imported dogs.

HORIBA’s POCKIT Central is a simple to use benchtop instrument which brings the potential for fast, accurate PCR testing into every veterinary lab. Tests are completed in just 85 minutes, enabling confident diagnostic and case management decision making without the wait for reference laboratory results.

Over 30 brand new PCR tests have been added across a range of species, including Lyme disease, Dirofilaria immitis, Neospora caninum, Pseudomonas aeruginosa, Mec A gene for MRSA, IBR and C. difficile. The new additions extend the capabilities of the POCKIT to more than 190 assays, testing up to 8 pathogens in one run.  The novel in-house PCR system has tests tailored to Small Animal, Equine and Farm practice, with specialist assays also available for Poultry and Aquaculture.

With a footprint of just 31 x 48cm, the POCKIT is a simple ‘sample in, result out’ system that completely automates the PCR process of extraction, amplification, reaction and reading. It is so easy to set up that a laboratory can be up and running within 30 minutes with staff training provided.

HORIBA’s Veterinary CPD Webinar with Ian Wright of ESCCAP UK & Ireland underlined the importance of pathogen testing in imported dogs, and with the addition of the new assays for further vector-borne diseases such as Lyme Disease, in-house PCR screening has become faster and easier with the POCKIT. The webinar provided an overview of emerging veterinary diseases with a particular focus on detecting exotic parasites. It discussed the need for and emergence of accurate testing protocols and equipment in a time of exponentially increasing imported diseases.

Alongside other testing protocols, the value of in-house PCR testing delivering highly specific and sensitive results for certain diseases was highlighted. “Testing is crucial to manage UK biosecurity, zoonotic risk, patient health and for assessing prognostic outcomes,” said Ian Wright. “Securing results quicker using in-house PCR testing has really opened up as an option for vets in recent times and it offers the advantage of rapid turnaround for certain diseases. For example, for a lot of tick-borne pathogens, doing group PCR testing for them is very useful.”

“Dogs and cats can be real Trojan Horses, although those exhibiting symptoms can be picked up quite easily, for those that are asymptomatic, then the importance of screening tests such as PCR is evident,” added Paul Lymer, Veterinary Business Manager, HORIBA UK. “Using our POCKIT Central benchtop veterinary PCR system, which now offers over 190 different veterinary tests, is giving veterinary surgeries access to reliable and faster diagnoses within their own practice.”