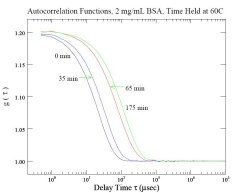 Wyatt Technology, the world leader in solutions for absolute macromolecular characterization, has published a new application note to demonstrate the unique capability of its DynaPro™ Plate Reader dynamic light scattering (DLS) instrument for achieving rapid detection and characterization of protein aggregates. The DynaPro Plate Reader was able to perform DLS measurements on samples within the wells of a well plate, without removing the samples or physically introducing any substances into the wells. As a result, this innovative instrument was able to allow for programmed measurements of many solution conditions quickly and easily with minimum user intervention.

Protein systems often exhibit aggregation as a result of changes in environmental conditions, including changes in formulation pH, ionic strength, concentration, series of freeze-thaw cycles and forced aging. Research has demonstrated that aggregation of proteins is closely related and perhaps causes several neurodegenerative disorders in humans such as Alzheimer's, Parkinson's, Huntington's disease, amyotrophic lateral sclerosis and prion diseases. As a consequence, much effort has been focused on determining the specific conditions that lead to aggregation. DLS has proven a powerful and reliable technique for this type of analysis, being capable of performing fast and accurate measurements of multiple samples, thus clearly establishing aggregation conditions.

An experiment was developed to demonstrate the unique analytical capabilities of DLS. For this particular application, protein samples with varying degrees of aggregation were generated by heat stressing Bovine Serum Albumin (BSA) at 60°C. Aliquots were removed from the solution every five minutes for a total time period of 175 minutes. Proteins were expected to exhibit increased aggregation with increased time held at 60°C. Triplicate 30 μL aliquots of each condition were placed into a low volume 384 well plate, resulting in 108 aliquots for the 36 different exposure times. Following sample collection and plate loading, the plate was placed into a Wyatt DynaPro DLS Plate Reader with the sample space held at 5°C. The plate was then stored for 13 days at 5°C and re-measured at 5°C. Including movement between wells and auto-adjustment of laser power and detector attenuation settings, the total measurement time for the plate was only 50 minutes.

The results of the experiment clearly demonstrate that the average size of the samples in solution increase with exposure time, resulting in longer correlation times. The increased hydrodynamic radius and intensity of scattered light were clearly indicative of increased aggregation of proteins with increased exposure to 60°C. Aggregation was not found to evolve significantly over two weeks’ storage at 5°C.