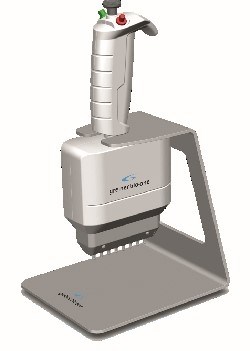 Greiner Bio-One, a technology partner for the diagnostic and pharmaceutical industry, showcased the new Cryo.s 8-channel hand-held decapper at analytica 2016 in Munich as a useful aid for handling Cryo.s biobanking tubes.

Greiner Bio-One has been developing and producing high-tech products for cryogenic storage for 30 years. Cryo.s biobanking tubes are an example of this and provide the perfect solution for sample storage in automated storage systems with a high-throughput of tubes. This range of tubes is user, and automation friendly, and is generally used in conjunction with 96 position racks that conform to SLAS/ANSI standards. To enhance this offering, Greiner Bio-One now supplies an 8-channel electronic decapper. The decapper is handheld and cordless, and facilitates the easy removal and replacement of caps.

The hand-held device has eight individual motors that can each open and close one tube with maximum precision allowing eight tubes to be conveniently opened and closed in parallel. A microchip controls the torque precisely and prevents overtightening and incomplete closure of the screw cap, for example. The ergonomically optimized and intuitive tool can also be used in small or awkward spaces in the lab due to its cordless operation.

Cryo.s biobanking tubes can be used in combination with a variety of storage boxes and racks to store biological samples in manual, semi- or fully automated cryogenic storage systems at temperatures down to minus 196 degrees Celsius. All tubes in the Cryo.s product family, which are manufactured using only an ultra-pure polypropylene of medical grade quality with USP Class VI certification, are guaranteed to be free of detectable human DNA, DNase, RNase and endotoxins.