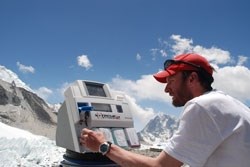 The Xtreme Everest 2 team, a leading hypoxia research organization, has returned from its three month expedition to Mount Everest along with two blood gas analyzers from Siemens Healthcare Diagnostics. The team of intensive care doctors, nurses and scientists used the expedition and systems to better understand adaption to hypoxia, a condition which causes a deficiency in oxygen reaching tissues of the body.

Tests were conducted at various altitudes with the main laboratory situated at Everest base camp some 5,364 metres above sea level. With just half as much oxygen in the air as at sea level, the volunteers blood oxygen levels closely reflected the levels experienced by patients suffering from the condition, as witnessed by the team in their daily roles within critical care and intensive care units (ICU).

Two Siemens blood gas systems assisted the Xtreme Everest team on the mountain, including the RAPIDPoint® 500 and RAPIDLab® 348EX. The Xtreme Everest 2 expedition follows previous research conducted on Everest by the organisation in 2007. The goal of the 2013 research was to look at adaption to hypoxia with over 60 different studies being performed including an investigation of how micro-circulation is impacted by the release of nitric oxide in response to hypoxia and mitochondrial function. The data from the studies will help develop new ways to treat hypoxia that might change how the condition is managed in an ICU environment. Having recently completed the expedition, the Xtreme Everest organisation is currently analyzing the 15,000 samples gathered with initial results anticipated in early 2014.

During the expedition, the Siemens blood gas analyzers were put to the test in extreme conditions, and continued to work to a high performance criteria. The RAPIDPoint 500 offers ease-of-use to deliver laboratory-quality results in approximately 60 seconds from a single, whole blood sample. The system’s built-in CO-oximeter was used by the team to investigate hemoglobin mass levels at high altitude. The RAPIDLab 348EX Blood Gas Analyzer, which features a new color touchscreen monitor for intuitive ease of use, was used to perform comparison studies with the 348 model used in the 2007 expedition.

The full Xtreme Everest 2 study included the gathering of oxygen deprivation data from a cross-section of population. 100 adults aged between 20 and 73 from the UK and Europe joined the expedition to represent a randomised model of an ICU population. 12 children aged between eight and 17, chaperoned by medical colleagues at Great Ormond Street Hospital, also joined the team for part of the trip. 65 Sherpas, natives to the mountainous regions of Nepal, were additionally studied to examine the difference in adaptation to low-oxygen environments when compared to lowlanders. Initial results have shown that although they have comparable oxygen delivery, the microcirculation is much better in Sherpas and the level of nitric oxide is much higher.

“2013 marks the 60th anniversary of Sir Edmund Hillary and Sherpa Tenzing Norgay reaching the summit of Everest. We’re learning today that Sherpa physiology may hold the answers to how humans adapt to low levels of oxygen,” states Dr Dan Martin, Expedition Leader at Xtreme Everest and Honorary Consultant in Anaesthesia and Critical Care Medicine at the Royal Free Hospital. “During our second successful expedition to Everest, Siemens Healthcare Diagnostics’ blood gas technology has played a pivotal role in collating the necessary samples and data, performing in even the harshest of conditions.”

“Siemens Healthcare Diagnostics is delighted that the RAPIDPoint 500 and RAPIDLab 348EX have assisted the Xtreme Everest organization once again during the expedition,” states Hilda Crockett, Regional Business Manager for Point of Care, North West Europe and UK, at Siemens Healthcare Diagnostics. “It is great to see the systems are not only being used in a laboratory environment but for innovative research in a variety of settings. We look forward to working with the Xtreme Everest organization again in the future to provide life-changing research for ICUs.”