Product News: The Institute of Chemistry and Technology of Polymers (CNR) uses the Linkam THMS600 Temperature Stage for Biodegradable and Biocompatible Polymer Research 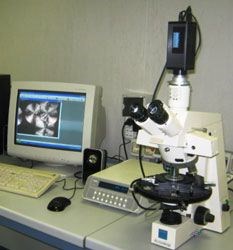 Market leaders in temperature controlled microscopy, Linkam Scientific Instruments report on the use of their popular THMS600 stage for polymer research at the Institute of Chemistry and Technology of Polymers (CNR), Italy.

A group of scientists from the CNR is investigating the melting kinetics of poly (3-hydroxybutyrate) (PHB), a natural thermoplastic polymer with mechanical properties comparable to synthetic polymers. PHB is now the focus of scientific interest as it has commercial potential as a fully biodegradable and biocompatible product. Potential uses include environmentally friendly packaging and films, pharmaceutical drug administration, and biocompatible resorbable medical implants. Small batches of PHB have been produced since 1925 by bacterial fermentation, but until now there is no large scale commercial production because it is more expensive than commonly used polymers. Further limitations are its narrow processability window, its brittleness and its very low resistance to thermal degradation. Since the melting temperature of PHB is around 170-180°C, the processing temperature should be at least 180-190°C, but at these temperatures thermal degradation of PHB proceeds very quickly.

The Linkam THMS600 stage fitted to a Zeiss polarized light microscope was used to study PHB. Initially samples were heated above the melting point, at 185°C, 190°C, 192°C, or 195°C, in order to erase previous thermal and mechanical history followed by cooling at 5°C/min after 3 minutes at the high temperature. It was observed that a high number of spherulites develop when the polymer is melted at 185°C for 3 minutes but contrasted to very low spherulite development at >192-193°C. It was concluded that melting below 192°C does not result in complete melting of the crystals, and so the nucleation density is very high in the subsequent crystallization step. It is theorized that the partially unmelted polymer retains a large memory of previous crystal order, and so the residual chain portions act as nucleation centers and result in a high nucleation density and a small spherulite size.

The team has found that some of the effects reported in literature as caused by degradation are actually related to non-completely melted structures They found the chain degradation attained upon exposure at high temperatures has much lesser influence on crystallization kinetics than incomplete melting, with some effects detectable on the spherulitic morphology and on the final degree of crystallinity. The research is ongoing as the scientists continue to analyze quantitatively the process of erasing the crystal memory in PHB and attempt to estimate the activation energy.

Dott.ssa Maria Laura Di Lorenzo, one of the scientists working on the PHB research, added "the best feature of our Linkam stage is the fast heating/cooling rates, not accessible with other stages that we have in our laboratory."

The Linkam THMS600 stage is one of the most widely used microscope stages on the market and is used in many applications where high heating/freezing rates and 0.1°C accuracy are needed. With a wide temperature range of -196°C to 600°C samples can be quickly characterized by heating to within a few degrees of the required temperature at a rate of up to 150°C/. The entire experiment can be saved as an online plot or exported to a spreadsheet application.