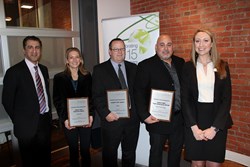 SelectScience has announced the winners of the 5th annual Scientists’ Choice Awards during a ceremony held at the Pittcon 2013 Conference and Expo, Philadelphia, USA.

The winners of the annual New Product Scientists’ Choice Awards, which recognize new products that have significantly contributed towards laboratory efforts in 2012, have been revealed. Agilent Technologies, Eppendorf and Waters all scooped up awards, with products both nominated and voted for by scientists around the world.

The ceremony was held in conjunction with SelectScience’s 15th Birthday celebrations at the Philadelphia Center for Architecture. Guests enjoyed a fantastic evening of champagne, canapés, augmented reality and live music.

Winners of the 2012 Scientists’ Choice Awards:

Members of SelectScience were invited to nominate their favorite Separations, Spectroscopy and General Lab products launched in 2012. The nominations were narrowed down to the most popular products for each category and members then voted for their winners.

Kerry Parker, Editor and General Manager of SelectScience, commented “The Scientists’ Choice Awards celebrate the new laboratory products and equipment making a difference in labs each year. These awards are unique since the nominees and winners are chosen by members of SelectScience.”

Voting for the Best New Life Science Product of 2012 is still open. Scientists can vote for their favorite product here. The winner will be announced at the AACR 2013.

For more information about the Scientists’ Choice Awards visit www.scientistschoiceawards.com.