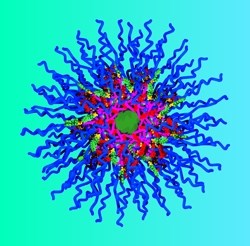 Scientists have recently developed nanoparticles that deliver one or two chemotherapy drugs, but it has been difficult to design particles that can carry any more than that in a precise ratio. In a paper published in the Journal of the American Chemical Society, chemistry researchers from MIT have shown that they can load nanoparticles with three commonly used ovarian cancer therapeutics.

SelectScience spoke to Jeremiah A. Johnson, Assistant Professor of Chemistry at MIT, and an active faculty member in the MIT Program for Polymer Science and Technology (PPST), about this novel drug delivery technology that could drive cancer therapeutics forwards. The Johnson research group is focused on the development of new concepts and methods for macromolecular synthesis and surface functionalization.

Drug-loaded monomers
Drug-delivering nanoparticles have previously had encapsulation or chemical attachment complications, involved with associating the drugs to be delivered inside or on the nanoparticle. Combining both methods has had some success, but still limits the delivery to two drugs and is often not precisely controlled. Johnson’s research group has created a nanoparticle that overcomes the limitations of the precise dose and quantity of different drugs. It seems quite simple really; the revolutionary new particles are instead made up of ‘building blocks’ or monomers that already include the drug. These monomers are then combined together to make a very specific particle, with precise control over how much of each drug is included.

“We designed novel drug-loaded monomers that can be easily polymerized by ring-opening metathesis polymerization (ROMP). Thus, through the simple combination of these different monomers we can easily create nanoparticles that carry any desired ratio of various different drug molecules.”

Johnson also added: “It enables the first example of a nanoparticle that can release a precise ratio of three different chemotherapy drugs.”

Ovarian cancer
In this ovarian cancer example, the researchers created particles that carry the commonly used drugs cisplatin, doxorubicin, and camptothecin, which are often used alone or in combination to treat ovarian cancer.

The nanoparticles each carry a maximum tolerated dose of each drug in a set ratio. Each of these well known drugs has its own drug delivery or release mechanism: Cisplatin is freed on exposure to glutathione (an antioxidant) as soon as the particle enters a cell; Camptothecin is also quickly released on contact with the cell based enzymes esterases; and doxorubicin is released only when ultraviolet light shines on the particle, from an outside source. Once all three drugs are released, all that is left behind is PEG, which is easily biodegradable in the cell. Nanoparticles carrying all three of these drugs killed the ovarian cancer cells at a significantly higher rate than those that delivered only one or two drugs.

When asked about the future of this nanotechnology synthesis for additional cancer therapeutics, Johnson added: “There are many areas where combination therapies are advantageous. We are building particles for other cancer types such as pancreatic and lung cancer. We are also building particles with combinations of antimicrobial agents, and also for controlled release of multiple agents for post-surgical ophthalmological treatments."