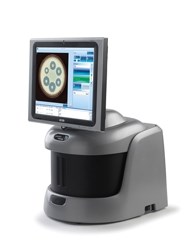 Synbiosis, a world-leading manufacturer of automated micro- biological systems, is pleased to announce its ProtoCOL 3 automated inhibition zone measurement system is being used at a major UK based microbiological contract testing laboratory to significantly speed up throughput of their antibiotic susceptibility testing.

Microbiologists at the contract testing laboratory are using a ProtoCOL 3 and SynStats software to measure zones, determine each antibiotic’s potency from measurement data and produce a result in an instant. Using the ProtoCOL 3 and SynStats software in combination is helping microbiologists at this contract testing laboratory to significantly increase their throughput when determining the efficacy of new antibiotics.

A microbiologist at the contract testing laboratory explained: “We used to perform approximately five or six, 5+1 assays each week on square plates and were measuring inhibition zones manually. It was taking us around 30-40 minutes to measure the 25 zones and read each square plate, which meant several hours of measuring to complete an assay run. We needed to speed up our throughput, as we are being asked to take on much larger projects and we decided to assess automated inhibition zone measurement equipment.”

The microbiologist continued: “We tested three systems and in terms of value for money and performance the ProtoCOL 3 came out in front. The statistical analysis software we were using is only European Pharmacopeia compliant so we also chose to upgrade our statistical analysis software to the SynStats because this is compatible with the ProtoCOL 3 and is both European and US Pharmacopeia compliant, something which is becoming increasingly important for us. Using the ProtoCOL 3 and SynStats, we now analyze around 18, 5+1 assays on round plates, measuring over 100 zones and have the potencies in the time it took us to read just 25 zones on a square plate manually, so it has really improved our throughput.”

Kate George, Applications Specialist at Synbiosis concluded: “There is a growing need world-wide for new antibiotics to combat life-threatening bacterial infections and we’re pleased to hear the ProtoCOL 3 is helping scientists at this contract testing firm with their regulatory quality testing. Their use of Synbiosis technology is a testament to the fact that the ProtoCOL 3 automated inhibition zone measurement system and SynStats software are an excellent combination for any pharma or CRO that needs to cost-effectively increase productivity of their antibiotic sensitivity testing.”