Industry News: Taking a step toward discovering the cause of joint disease 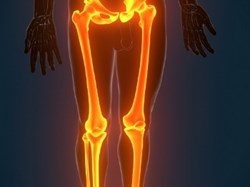 Terence D. Capellini has been interested in how joints work for almost three decades. Part of it is due to personal experience, as he suffered several joint injuries as a college ice hockey player and recently developed knee osteoarthritis. The principal investigator of Harvard’s Developmental and Evolutionary Genetics Lab has also seen the pain and limited mobility of loved ones who have received similar diagnoses and injuries.

It made Capellini, the Richard B. Wolf Associate Professor in the Department of Human Evolutionary Biology, wonder: “Why do certain joints naturally acquire some disease while others do not, and why are some joints more prone to injury than others?”

Capellini took a step toward some answers in a recent study on joint disorders published July 6 in Nature Communications. The findings could one day lead to therapeutics for two difficult-to-treat joint disorders that primarily affect the very young and the middle-aged and older.

The report details regulatory variants found near GDF5, a gene that plays a crucial role in joint formation. The study pinpoints two separate mutations near the gene, one that can cause knee osteoarthritis in older adults and another that can cause hip dysplasia in babies. Knee osteoarthritis, a degenerative disease, affects more than 30 percent of people over the age of 65, while hip dysplasia, a structural disorder, is present in one out of 1,000 newborns.

The findings may lay the groundwork for possible screenings for these diseases, which could allow for medical and non-medical interventions since patients will know they are at risk. The results could also lead to new potential treatments because scientists can better understand, target, and possibly affect the expression of the gene mutations to prevent the maladies.

“We can begin to understand whether we can start targeting these genetic regions for therapy,” Capellini said.

The team of researchers say the mutations that lead to the diseases originate within two distinct regulatory switches near the GDF5 gene. One of the switches affects a population of cells that make the knee joint form its shape, while the other switch affects those that make the bones growing around the hip fit correctly.

The discovery gives the researchers clues about the biological importance of these switches as target areas for therapies because they are prone to disruption.

The report is a collaboration between scientists from Harvard’s Faculty of Arts and Sciences, the Broad Institute, the Harvard School of Dental Medicine, Harvard Medical School, Boston Children’s Hospital, and medical researchers in China. Pushpanathan Muthuirulan, a research associate in Capellini’s lab, was first author on the study, and Ata Kiapour, an assistant professor of orthopedic surgery at HMS and Children’s Hospital, did the bulk of the medical imaging.

The research team started by examining data acquired from genome-wide association studies on knee osteoarthritis and hip dysplasia. The goal of these types of studies is to detect and map genetic mutations across the genome associated with disease risk or variation in a trait. They chose GDF5 because it’s a region of the genome associated with about 20 different skeletal traits and has hundreds of potential disease-causing mutations.

Capellini and his colleagues identified the regulatory on and off switches across the genome responsible for building different joints, such as the hip, knee, shoulder, and elbow. With that information and the genome-wide association data, they used CRISPR gene-editing techniques to modify human cartilage cells in a dish and engineer mice to have separate mutations in each of the knee and hip switches they found.

These humanized mouse models allowed the researchers to study how each mutation impacts the formation and pathology of each joint. They were able to see whether the DNA sequences in those switches possessed genetic mutations that have been associated with risk of knee osteoarthritis or hip dysplasia. Through elimination and arduous functional testing, they found two separate mutations that can lead to both diseases.

The researchers also applied similar computational methods to genes beyond GDF5. They found that nearly three-quarters of examined genes that are involved in multiple musculoskeletal diseases show the same patterns between potential disease-causing mutations and separate on and off switches for different joints.

The next steps for the researchers involve applying these experimental techniques to other regions of the genome to see whether these patterns hold when it comes to knee osteoarthritis, hip dysplasia, and other skeletal diseases.

This work was supported by The National Institute of Arthritis and Musculoskeletal and Skin Diseases, National Science Foundation, and a Harvard University Dean’s Competitive Award.