In the Relapsing-Remitting form of Multiple Sclerosis (RRMS), a single biomarker (soluble neurofilament light chain or sNfL) is identified as a biomarker for inflammatory activity in MS, but is limited in its ability to identify relapses. Through screening several hundred proteins using Olink® technology, three additional protein biomarkers have been identified as an improved relapse-specific signature to monitor disease activity in RRMS patients.

Multiple sclerosis (MS) is a chronic autoimmune disease affecting the nervous system (brain and spinal cord) causing the degradation of myelin, the protective insulating layer around nerve fibers. By disrupting the normal signaling to and from the brain, unpredictable symptoms develop: numbness, fatigue and mood changes, all the way up to pain, paralysis and/or blindness.

Nearly 1 million people in the United States and up to 2.8 million worldwide live with multiple sclerosis, which is the most common disabling disease of young adults. Current research indicates that a complex set of genetic and environmental factors play a role in its pathogenesis, including low levels of Vitamin D, infection with Epstein-Barr Virus and childhood obesity all implicated. 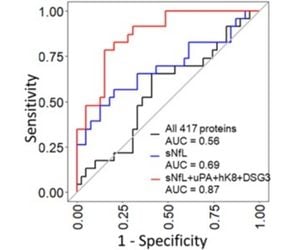 While testing CSF for Alzheimer’s Disease using the FDA-approved assay, lumbar puncture can cause side effects such as discomfort or headaches, and physicians can be averse to the procedure given its invasive nature and other restrictions.

From a sampling perspective having the option for minimally-invasive blood sampling is highly preferable, not only from a patient perspective but also for the important ability to obtain samples over time. For a disease that takes 8 to 10 years to develop, this capability to easily obtain specimens cannot be overstated.

RRMS occurs in 85% of all MS patients, where relapses (called MS flares or exacerbations) are defined as worsening clinical symptoms followed by a period of remission where partial or full recovery is experienced. Comorbidities and infections often confuse the diagnosis of a true relapse, often resorting to an expensive gadolinium MRI contrast scan. These are subjective in nature, and this method may suffer from false negative results.

A minimally invasive, blood-based method of detecting relapses is therefore needed for both clinical practice and in clinical trials for development of novel therapeutics.

Researchers from the Oklahoma Medical Research Foundation (OMRF) and Stanford University collaborated to provide two distinct sample cohorts; the first a set of OMRF serum samples of 62 RRMS patients and 13 healthy controls, consisting of 23 relapsing at time of blood draw and 39 who did not relapse, called the Cross-sectional Cohort. A second set of Stanford plasma samples consisted of 12 RRMS relapsing patient samples, with some given different types of treatments (there are some 22 approved treatments for MS, called disease-modifying treatments [DMT]). Samples from these patients were collected during active relapse, and from 0 to 19 months during their remission.

The paper points out the importance of the following: “accuracy and reproducibility of the serum proteins measurement is paramount for the discovery of robust biomarkers”.[1] Eight Olink® Target 96 panels were used to measure 724 proteins in both patients and healthy controls (specifically, the Olink Cardiometabolic, Cardiovascular III, Development, Inflammation, Neuro-exploratory, Neurology, Oncology II and Oncology III panels).

To underscore the need for reproducibility, the researchers undertook a technical duplicate quality control assay of 18 samples, where any of the 724 individual assays falling below a Pearson’s correlation coefficient of 0.75 were disqualified from their use in additional analyses. The resulting 417 proteins passed this reproducibility analysis from their sample cohorts.

Interestingly 13 out of 23 relapse patients received high-dose corticosteroids during their MS relapse, and its influence on biomarker abundance was measured. A set of six proteins were found to be a strong association to steroid treatment. Importantly, the single marker sNfL (soluble neurofilament light) was significantly increased in patients undergoing steroid treatment, and did not decrease after treatment ceased, suggesting the elevated levels of sNfL were not a direct effect of steroid treatment in these patients.

A total of five proteins differentially regulated in RRMS were found in common between the two cohorts: the aforementioned sNfL, and four additional proteins, urokinase plasminogen activator (uPA), mannose binding lectin-2 (MBL2), kallikrein-8 (hK8) and desmoglein-3 (DSG3). In relapse, uPA, hK8 and DSG3 were all reduced in both sample groups. MBL2 was reduced in relapse in the cross-sectional serum samples, however MBL2 was increased in relapse in the other cohort.

The authors conclude this study ‘provides important information on biomarker discovery for MS relapse’ and establishes data for identifying and monitoring relapses in MS, in addition to exploring potential confounding factors such as age, sex, treatment and blood sample type (plasma or serum).

A company called Octave has also been working on biomarker discovery for improving the ongoing assessment of MS. Mr. Ferhan Qureshi, VP of Biomarker Product Development of Octave has presented on “Custom panel development for multiple sclerosis using the Olink platform”, available for viewing below.[2]