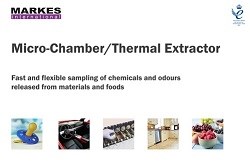 Markes International has announced the release of a new brochure describing its Micro-Chamber/Thermal Extractor™ (µ-CTE™), for sampling volatile and semi-volatile chemicals from materials and foods.

The new brochure concisely outlines the operation and functions of the product, which in its regular mode of operation collects chemical vapors released from samples onto sorbent-packed tubes, for analysis by thermal desorption (TD) and gas chromatography (GC).

It also describes the three modes of operation of the Micro-Chamber/Thermal Extractor, which make it applicable to the analysis of bulk samples, for surface emissions tests, and to assess permeation of chemicals through a thin layer of material. The brochure illustrates by example how this makes it valuable to analysts in a wide variety of scenarios, from the manufacture of construction products to food aroma profiling.

The Micro-Chamber/Thermal Extractor has for a number of years been highly-regarded for screening emissions from materials, leading to its use being required for adherence to several international standard methods, including key protocols such as ISO 12219-3 for detecting emissions from materials used in vehicle interiors. The brochure also highlights an emerging application of the Micro-Chamber/Thermal Extractor – the aroma profiling of foods and consumer products, with examples illustrated including cheese, strawberries, plastic toys and tobacco.

Key to the popularity of the ​microchamber, says Dr Caroline Widdowson, Product Marketing Manager – Thermal Desorption, is its ease of use “GC–MS analysts across many fields continually struggle with laborious sample preparation techniques. The principle of dynamic headspace used by the microchamber speeds up the whole sampling process considerably, by releasing organic vapors from a material quickly and reproducibly.”

“Importantly, because up to six samples can be analyzed simultaneously using the Micro-Chamber/Thermal Extractor, important differences between samples can be quickly and rigorously pinpointed. Analysts value this boost in productivity, especially because it complements the use of Markes core technology of thermal desorption, which of course brings numerous benefits in its own right.”