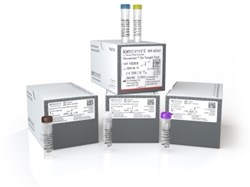 The U.S. Food and Drug Administration (FDA) has granted premarket approval to Thermo Fisher Scientific's Oncomine Dx Target Test as a companion diagnostic (CDx) to identify RET fusion-positive, metastatic non-small cell lung cancer (NSCLC) patients who are candidates for GAVRETO™ (pralsetinib), a targeted therapy developed by Blueprint Medicines. The Oncomine Dx Target Test was initially approved in 2017 as the first targeted next-generation sequencing (NGS)-based CDx for biomarkers associated with three FDA-approved NSCLC therapies. It is now also the first and only FDA-approved test of its kind for a targeted treatment for RET fusion-positive NSCLC. Thermo Fisher will update the Oncomine Dx Target Test to enable it to report RET fusions in the U.S. before the end of the year.

RET fusions are believed to be key disease drivers in about 1-2 percent of patients with NSCLC, which accounts for 85 percent of all lung cancers in the United States. New data show that NSCLC mortality has been declining in recent years, suggesting that advances in treatment, including targeted therapies, may be contributing to improved survival rates. RET fusions are on the list of key markers recommended for multi-biomarker testing in NSCLC by National Comprehensive Cancer Network (NCCN) guidelines. The approval now provides NSCLC patients the only path to receive rapid assessment of their RET fusion status with an approved NGS test.

The Oncomine Dx Target Test simultaneously evaluates 23 genes clinically associated with NSCLC. In 2017, the FDA approved it as a CDx to identify patients who may be eligible for specific targeted therapies. The test has also been approved by Japan's Ministry of Health, Labour and Welfare (MHLW) as a CDx for four biomarkers – EGFR, ALK, ROS1 and BRAF – associated with 12 targeted therapies for NSCLC.

Most recently, the MHLW approved the test to assess patients who may be eligible for treatment with entrectinib (Rozlytrek®) following a CDx agreement Thermo Fisher signed earlier this year with Chugai Pharmaceutical Co., Ltd., a member of the Roche Group. The Oncomine Dx Target Test is currently approved and reimbursed by government and commercial insurers in the U.S., Europe, Japan, South Korea and Israel, covering more than 550 million lives globally.

"It is our goal to provide cancer patients globally greater access to highly actionable, NGS-based multi-biomarker testing in important indications like NSCLC as recommended by multiple guidelines. Today's approval underscores this endeavor," said Garret Hampton, president of clinical next-generation sequencing and oncology at Thermo Fisher Scientific. "Our tests are designed to require the least amount of sample of any NGS IVD test on the market, leading to more patients benefiting from the test and put on the right therapy upfront. As part of our commitment, we remain focused on developing our next generation companion diagnostic by taking Oncomine Precision Assay and the Genexus System through the FDA's approval process."