Vaccine aims to combat numerous HIV strains, a key requirement of any vaccine to end the HIV/AIDs epidemic 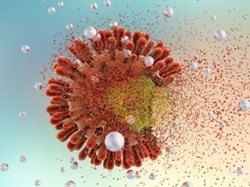 The Globally Relevant AIDS Vaccine Europe-Africa Trials Partnership (GREAT) – of which the University of Oxford is a lead partner – has announced the start of vaccinations in a Phase I clinical trial of a novel HIV vaccine candidate.

With the first dose given at the Center for Family Health Research in Zambia (CFHRZ), in Lusaka, Zambia, the trial will extend to sites in Kenya and Uganda in the coming weeks.

‘CFHRZ is proud to be part of the consortium evaluating HIVconsvX and to deliver the first dose of this experimental HIV vaccine in the HIV-CORE 006 trial.’

The goal of the trial, known as HIV-CORE 006, is to evaluate the safety, tolerability, and immunogenicity of a novel vaccine candidate, HIVconsvX, a mosaic vaccine targeting a broad range of HIV-1 variants, making it potentially applicable for HIV strains in any geographical region.

Professor Tomas Hanke, Professor of Vaccine Immunology at the University of Oxford, and lead researcher on the trial, said: ‘This highly rational, bioinformatics-assisted, vaccine design addresses the enormous variability of HIV-1 - one of the greatest challenges to the development of an effective vaccine against HIV/AIDS.’

Dr. Paola Cicconi, Senior Clinical Research Fellow at the University of Oxford, and the trial Chief Investigator, said: ‘An effective HIV vaccine remains an essential but unrealised component of the HIV prevention toolkit and remains the most cost-effective and desirable solution to end the HIV epidemic.’

The trial will see 88 healthy, HIV-negative adults, aged 18-55, who are considered not to be at high risk of infection, receive one dose of the vaccine initially, followed by a further booster dose at four weeks.

Dr. Vincent Muturi-Kioi, medical director at IAVI, said: ‘It is crucial that we have a diverse pipeline of HIV vaccine candidates that target both the antibody and T-cell arms of the immune system.

At present, prevention of HIV largely focuses on behavioral and biomedical interventions such as voluntary medical male circumcision, condom use, and anti-retroviral drugs used prior to exposure.

Dr. Walter Jaoko, director of KAVI-Institute of Clinical Research (KAVI-ICR) and trial principal investigator, said: ‘Preventive vaccines, especially those that provide durable protection against all major HIV subtypes, would be a powerful tool for people not able to access or use existing prevention options.

‘This is why it remains a priority that we design and evaluate novel vaccine approaches such as HIVconsvX.’

The researchers hope to be able to report results of the HIV-CORE 006 trial at the end of 2022.