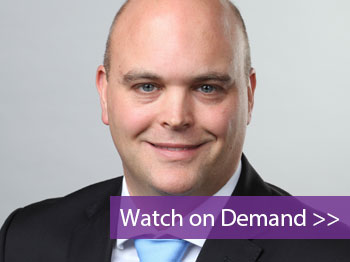 Part of the quest to understand neurodegenerative research requires a detailed accounting and measurement of the biological components in neurological cells, tissue and biofluids. This includes measuring the changes in protein expression and post-translational modifications (PTMs) including phosphorylation and, more recently, the hidden isomeric modifications (e.g., iso-aspartate).

Regulation of the abundance of proteins is one mechanism of preserving biological function, however, post-translational modification is another method that is often invisible to purely targeted assays such as ELISA or western blot. These ‘invisible’ modifications, such as the isomerization of amyloid-beta peptides in human brain tissue, can be investigated using ion mobility mass spectrometry.

Q: Do the proteomic markers predict Alzheimer’s disease sooner than a PET scan?

BR: They don't predict it any earlier than Abeta, tau or p-Tau. What they do correlate with more closely is disease progression. The acute-phase response proteins that we measured closely relate with actual clinical presentation or are symptomatic forms of the disease. They don't correlate with amyloids in the brain in individuals who are essentially controls or have no cognitive symptoms. That’s in comparison to Abeta and tau, which are obviously elevated in those individuals, even though they aren't displaying any symptoms. It seems that neuroinflammation is occurring at a later stage in the disease and not at the initial onset, it's more of a response.

Q: How does the cerebral spinal fluid (CSF) proteomics track with plasma proteomics? Did they correlate?

BR: We haven't done a study looking at the plasma and CSF from the paired individuals. There are some studies in the literature looking at those questions directly though. It’s dependent on the marker whether there's a correlation or not. For example, my collaborators, Scott Ayton and Ashley Bush, and others, have looked at ferritin levels in CSF and plasma, and found that they don't correlate. That’s partly because the level of ferritin in plasma is 10 times greater than in CSF.

Therefore, the CSF pool of ferritin is isolated from the plasma pool, and this is marker dependent. There are many markers that are found in CSF that are also found in plasma, but are also produced by the liver at very, very high abundances. There isn't a correlation between the level of plasma and CSF levels. However, we haven't investigated that for all of these specific markers yet.

BR: There is partial resolution of some of these isomers, where we get a 30% valley between isomer 1 and isomer 2, and that's at a resolution of 50 or 60. So, for accurate quantitation, ideally, we would want baseline resolution. Therefore, enhancing the resolution to 200 will essentially get us much closer to that goal.

The technique for doing that is a combination of how the data is collected in the mass spectrometer, and then post-processing steps using software and post-processing tools from the Pacific Northwest National Labs that have been developed in collaboration with Agilent. You go through and you can target the isomers and use that to enhance the resolution. Essentially, we control for some of the diffusion that occurs in the ion mobility domain as the molecules are coming through. The diffusion that occurs is well known and well studied, meaning we can correct for it and enhance the resolution of the peptides.

Q: Have you tested microflow vs. nanoflow for deciding these proteins? If so, what are your pros and cons?

BR: We haven't tested microflow, which is in the one-millimeter range and tens-of-microliters type flow rates. We did compare nano versus the 2.1-millimeter standard flow. You have an increase in sensitivity under conditions of an individual peptide with nano and with the 2.1 method of standard flow technology there is a decrease in sensitivity, however, we're able to load more material. Essentially, we can load one microgram on nano and have a detection limit that's 10 times less. However, we can also load 10 micrograms on the standard flow and have a detection limit that's 10 times less and in the end, we have the exact same type of assay.

One of the biggest advantages of using standard flow is that we don't lose any ability to detect or quantify a target. What you do gain is the ability to do it fast. Standard flow is less prone to having issues of drift and retention time, as well as sample preparation problems where a sample clogs a column, and you have to replace your nanocolumn, for example.
Basically, you can gain the same information if it's a complicated or neat set of plasma or CSF. The only time we use nano is when there's some sort of isolation on the front end. That’s when nano really shines and starts to deliver you the sensitivity that is 10 times greater than standard flow. In general, everything we can detect with standard flow, we can pair it with nano using neat CSF, for example. For the reasons of reproducibility and ease of use, we stick with standard flow.

Q: Which solvent systems and columns did you use for the identification of these molecules by a triple quadrupole?

Q: Is the sample prep in the AssayMAP using immunoprecipitation? And what steps were you able to automate?

BR: With the AssayMAP, there was no immunoprecipitation. We simply used it for the reduction and alkylation, and then digestion steps and cleanup. This would be done using the solid-phase extraction, so using the C18-type cartridges to go through and do the automated cleanup.

The nice thing with the AssayMAP is that it'll do 96 samples at once. It leaves you with a plate that you can just directly transfer onto the autosampler on the 6495 and be able to hit "Run".