A laboratory in the US is using advanced imaging to decipher the role of a ‘double-agent’ protein in breast cancer, and to help develop drugs targeted at disrupting its function 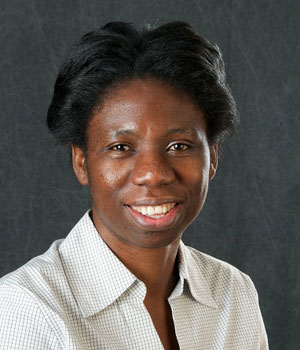 Okeoma, who works as an Associate Professor in the School of Medicine at Stony Brook University, is based within the Department of Pharmacological Sciences.

Breast cancer is the most common form of cancer in women worldwide, carrying a lifetime risk of approximately 1 in 8. Its incidence is also growing in men, for whom the risk is much less – about 1 in 1,000. The race is on to determine how breast cancer gets started and progresses at the detailed molecular level. Our natural immunity plays a role, in a finely-balanced arms race between protection against external pathogens and over-stimulation leading to cancer. Dr. Chioma Okeoma leads a research team in Stony Brook, New York, dedicated to improving our understanding of how internal host cell factors can either modulate or promote disease in response to external attack, focusing on HIV and breast cancer. Okeoma, who works as an Associate Professor in the School of Medicine at Stony Brook University, is based within the Department of Pharmacological Sciences, where she investigates how the host immune system can be a double-edged sword – inhibiting viral infection on the one hand, but at the same time promoting tumor development on the other. And there is one protein which encapsulates that paradox.

A ‘Double-agent’ Protein in Breast Cancer

Dr. Okeoma’s team is currently focused on an immune system protein called bone marrow stromal antigen-2 (BST2). When this protein is expressed in cells subject to viral attack, such as from HIV, it retains the viral particles produced by the cell on its surface. In so doing, BST2 prevents the release of viral particles into the surrounding extracellular milieu such that there is not enough cell-free virus to spread the infection to other cells. In other words, BST2 functions as an antiviral. However, knowing this left many questions unanswered, including what happens to cells so laden with viral particles on its surface when BST2 does not actually prevent the production of viral particles within the cell. Okeoma and her team therefore began to look more closely at the biology of BST2, using a mouse model of breast cancer, to tease out its role in the presence of a viral agent that leads to breast cancer development.

It turns out that BST2 is produced in large amounts in breast tumors in both mice and humans, and performs different roles depending upon the tissue in which it is expressed. In breast cancer cells, BST2 is over-produced via an epigenetic mechanism called hyper-methylation and continues to increase as the cancer becomes more aggressive. What is more, the same protein appears to promote contradictory cell functions, simultaneously promoting cell adhesion as well as growth and migration. It achieves this through multiple domains within the protein that each perform different functions.

Integral to unravelling these mechanisms has been access to the right imaging equipment. The Okeoma lab uses BioTek’s Lionheart™ FX Automated Microscope, and she explains why:

“We wanted instrumentation that would remove investigator bias in quantifying the number of cancer cell colonies or in examining morphological differences in our spheroids. We tested the Lionheart and liked its performance. One of my post-docs committed to the Lionheart after testing a range of other imaging equipment on the market.”

The capabilities of the Microscope have enabled several key discoveries around the biology of BST2, as Okeoma notes:

“We used the Lionheart to discover that, if cells expressed BST2, they released proteases, one of which was able to degrade collagen. Using time-lapse imaging, one of my students was able to see progressive degradation of collagen in the presence of BST2.”

Regarding current use of the instrument, Okeoma adds:

“It’s the automation that is key. Currently, we use the Lionheart to look at the structure and growth kinetics of the spheroids that we produce in the presence or absence of BST2. If you need to take images at very short intervals, such as ten minutes, you can do that with the Lionheart. This is not possible with the lab’s confocal microscope because it’s always busy.”

Okeoma’s staff are equally effusive, she says, paraphrasing them:

“Wow! – the high throughput nature of the Lionheart, being able to acquire kinetic data and go as far back in time as you want to without going back to the incubator.” 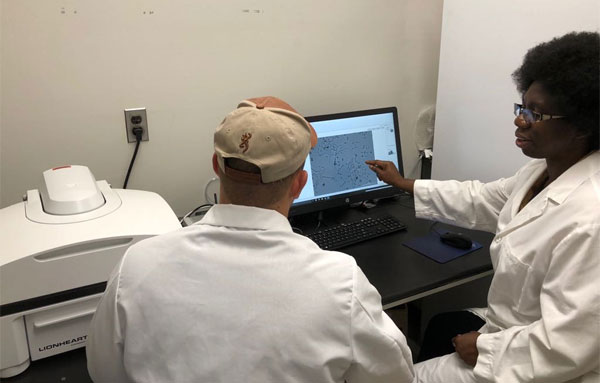 The Okeoma lab’s overall mission is to reveal all the genetic players in breast cancer. However, the next step will be to help patients:

“We want to identify the targets we can manipulate to help cancer patients and the HIV-infected person. We already have an anti-BST2 peptide that prevents cell adhesion, so we are working on improving the peptide’s efficacy.”

She also remains very clear as to how the Lionheart™ can help her achieve these goals:

“We can use the LionheartTM to acquire images on cell growth kinetics, survival and viability in the presence and absence of the peptide drug. But most importantly, we can set-up the machine to deliver molecules such as drugs at certain intervals. Once we optimize our peptide, we can grow our tumors in plastics, place them in the Lionheart™, inject the peptide and take the images we need.”

Find out more about the vital research of the Okeoma lab and how the BioTek Lionheart™ FX Automated Microscope can help advance your research.